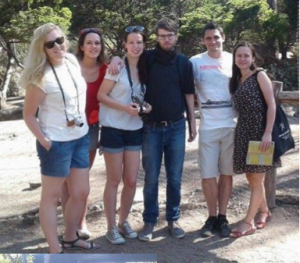 Round 5 of the  Australian Women’s Masters saw things continue as they have for the previous few rounds, with both Gu & Daulyte winning their games to move further clear of the rest of the field with all other games drawn. Both players have a 2300 opponent next round, before they meet each other in round 8 & these games in particular will be vital in determining the tournament winner. The Reserves has taken another twist, with Jody Middleton losing to Lillian Lu, to drop back to the pack chasing Narelle Szuveges. Round 7 sees the leaders meeting & this could be a crucial round for players looking to finish in one of the top places. Prior to the round 5 games, a number of players ventured to Melbourne Zoo to have a look at some Australian & other animals!

Round 5 – Game summary:
Irina Berezina & Kristyna Novosadova started quietly, with both players fianchettoing their kingside bishops, before Novosadova began to push her kingside pawns. Berezina managed to win a pawn, but then Novosadova used the semi-open file to generate pressure, forcing Berezina to return the pawn. Although the momentum swung a number of times during the game, neither player was able to gain a significant advantage in the queen & bishop pair v queen & knight pair endgame, with the game ending in a draw by perpetual check. Jilin Zhang played the Chekhover variation against Xiaobing Gu’s Sicilian Defence, opting for a setup with an early c4. Gu challenged Zhang’s pawn centre, before Zhang managed to get her queen trapped in the middlegame! Although Zhang managed to get a rook & bishop for the queen, Gu’s queen proved too powerful & after a series of exchanges, Zhang resigned. Maria Gosciniak played the Scandinavian Defence against Ticia Gara & achieved equality early in the game by challenging the centre & activating her pieces. After some manoeuvring in the early middlegame, a series of exchanges simplified the position to rook & knight against rook & bishop & when the rooks were exchanged, the players agreed to a draw soon after. Hanna Leks played the Margate variation of the Richter-Rauzer against Julia Ryjanova & the players were soon in a fairly level position, with another rook & bishop pair against rook & knight pair endgame appearing shortly after move 20. Both players maintained the balance in the position & with a repetition looking likely, they agreed to a draw. Deimante Daulyte played the Tarrasch variation against Anita Stangl’s French Defence & achieved a nice advantage out of the opening when Stangl decided to push her kingside pawns. Stangl hoped that the queenside would provide shelter for her king, however Daulyte showed that there was no cover their either & finished Stangl off with some nice tactics. In the Reserves, Narelle Szuveges stretched her lead with a win, with her nearest rival, Jody Middleton losing to Lillian Lu after trading into a losing king & pawn endgame.