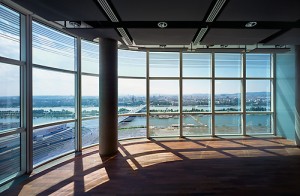 The Tech Gate, venue of the Austria Schach Bundesliga

The Austrian Bundesliga is starting this weekend with record strong participation. The line-up of top teams SK Sparkasse Jenbach, Champion of 2010 and 2011, and SK Advisory Invest Baden, Champion of 2008, reaches an average rating above 2600, while about half of the players in the league are Grandmasters.

The league consists of twelve teams, three of which will have to relegate to the second league. Match points count first. The season is played throughout three long week-ends. This year´s the league is starting late to fulfill Jenbach´s wish to stage one such week-end, which is only feasible after the end of the skiing season in this Tyrolean town. Thus, the three rounds to be played this Friday to Sunday, 20 to 22 January, are the first of the season.

It may come as a surprise to you, but Vienna hasn´t staged a Bundesliga round since 1997 in spite of the capital being about the only place in Austria where the League can attract a large crowd. Online transmissions go back about ten years, making the Austrian Bundesliga maybe the first league that has been fully transmitted live on the web. A running commentary in German is livestreamed for the first time.