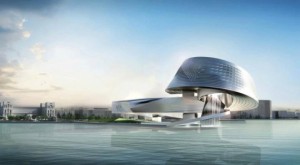 FIDE Grand Prix is a stage in the FIDE World Championship cycle. The winner and second placed player overall of the GP Series will qualify for the next Candidates Tournament.

Back in 2008 it was also the capital of Azerbaijan that hosted the first ever Grand Prix event and a great deal has changed since then as FIDE has organized 30 Grand Prix tournaments.

One only needs to remember that the event six years ago was won by future World Champion Magnus Carlsen, Chinese top player Wang Yue and Vugar Gashimov, one of the leading chess players of Azerbaijan, who tragically passed away in January 2014.

Over eleven rounds, the strongest players in the world will compete in the round robin tournament with the time control of 120 minutes for the first 40 moves, with 60 minutes being added at that point and then each player will be allotted 15 minutes after the second time control and an increment of 30 seconds per move will be allowed from move 61 onwards.

After one year of the very entertaining Grand Prix series 2012-2013 the fans looking forward to see the variety of battles between the players of all styles.

Almost half of the field consists of the Russian players, including Grand Prix veterans Alexander Grischuk (3rd place in GP series 2008-2010, number 4 in the World), Peter Svidler (seven-time Russian champion), Sergey Karjakin (2nd in Candidates Tournament 2014), and newcomers Evgeny Tomashevsky (semi-finalist of the World Cup 2013) and Dmitry Andreikin (finalist of the World Cup 2013).

A very special cup will be prepared for the overall winner in the Grand Prix series 2014-2015. At the opening ceremony in Baku the Classic Jewelry House Lobortas will present the models of future Big and Small trophies to be awarded to the FIDE Grand Prix series winner.

The trophy consists of precious elements and stones of varying size, including silver, gold and diamonds. The Classic Jewelry House Lobortas has experience addressing the FIDE’s needs, having previously created for the FIDE the Large and Small Chess Cups “Caissa” and the cup for the winner of recently finished Women’s Grand Prix series 2013-2014.

The Grand Prix Series will consist of four tournaments to be held over two years (2014-2015). Each of 16 players of Grand Prix series will play in three tournaments out of four and all his results will be taken into account for the overall final standings of the Grand Prix.

Article by Anastasya Karlovich, courtesy of the official website