Bank of Georgia has signed a memorandum of cooperation with the European Chess Union. The Bank will financially support the establishment and popularization of chess at schools, as well as the training of prospective players, coaches and referees at chess training centres.

“Chess is a sport that promotes people’s development, especially from an early age. Therefore, it is important to promote it at schools,” said Archil Gachechiladze, Deputy Chief Executive Officer at Bank of Georgia.

The memorandum provides for the following: the promotion and popularization of the implementation of chess at schools. It includes the realization of proper programmes and projects among children and youngsters by the EU. Prospective players, coaches and referees will leave for special training centres for recruitment.

The development of chess in EU countries is also a priority. The Bank will support various projects initiated by the ECF.

The Bank will be providing financial support for the projects and activities initiated by the European Chess Union.

“This initiative consists of a variety of projects and each will have a separate budget,” said Gachechiladze. 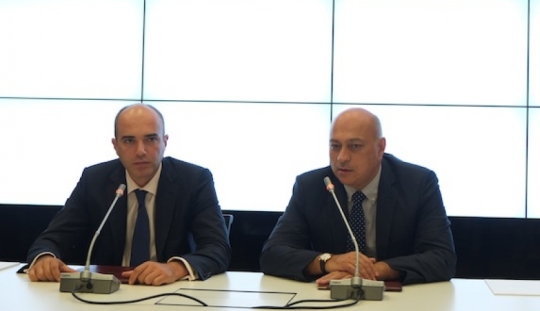 “The memorandum is particularly important because it means that the ECU will have such an esteemed guarantor and supporter as Bank of Georgia. We will jointly implement such projects,” said Zurab Azmaiparashvili, Deputy Minister of Sport and Youth Affairs of Georgia, ECU presidential candidate.

In Azmaiparashvili’s words, Bank of Georgia carries out many projects in the education system in order to support and encourage the education and development of the next generation. “The fact that the management of the Bank is placing such emphasis on chess is very important,” he added.

“Educational projects are very important for any country. Chess plays a special role in people’s development. Yet, this has not been fully taken advantage of. We need to raise the next generation to be better thinkers; more concentrated children that will have no difficulty in mastering new heights,” said Azmaiparashvili.

“Chess promotes the formation of skills from an early age that prove to be very useful later in life. Chess sets up such qualities as: concentration, the ability to calculate accurately, mental endeavour and teaching someone responsibility for their actions,” Azmaiparashvili told The FINANCIAL.

Under the terms of the memorandum, Bank of Georgia and the European Chess Union will cooperate in different directions, on both regional and international levels.

Chess and Education, Meeting FIDE-ECU-RSSU
On 7th February, during the Moscow Open 2015, a joint meeting between the representatives of FIDE, ECU and Russian State Social University was held ...