Batchimeg Tuvshintugs of Mongolia is playing in her 3rd event of the FIDE Grand Prix series. She is number 10 on the rating list for men and number 2 for women in Mongolia.

Batchimeg took in 2006 1st place in the Susan Polgar World Open Championship, 5th place in the 16th Asian Games from Guangzhou (2010) and the gold medal with her team in the 11th World University Championship (Zurich, 2010). Jamie Kenmure had a small chat with this talent and beautiful lady from Mongolia.

Q: Batchimeg, you first made your appearance on the Grand Prix circuit in Geneva, Switzerland. Please tell me how important it is for you to play in this series of events and more importantly, what does this event here in Khanty Mansiysk means to you?

A: FIDE and our Federation decided to organise the final stage of the Grand Prix in Mongolia. I was chosen by my Federation and it is such a big opportunity to play in such great events and I have never played before in the Grand Prix.

My first Grand Prix was in Geneva, Switzerland and I was feeling excited but nervous there as I haven’t played most of these players before and for me it was great chance to play against such high rated players. I have played against some of the Asian players. The first tournament was ok for me.

From Geneva to Dilijan I started feeling confident and getting used to play on such a high level. I was able to prepare more for the Grand Prix and my opponents.

This is my third Grand Prix actually and I hope to do a better result than I did in Dilijan. I have to prepare physically and mentally by myself. In Dilijan, I was with the national team coach and unfortunately this time there was no one able to help me. In August, I will also do my best in my country. 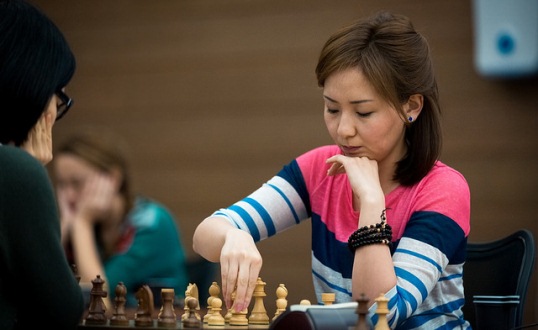 Q: Could you tell me more about chess in Mongolia, especially women’s chess and the support Mongolia gives to chess?

A: Chess is a popular sport in my country and many kids are started to play along with parents. Our Government started to support women’s chess. We now have our National Chess Team which consists of two men and two women along with one coach.

The Government is sponsoring three tournaments a year. It is getting better but we still need more support. Other than those three tournaments, we still need to find our own sponsors. Of course many young girls are starting to play chess and we need some sort of program along with financial support for the new generation and for the girls. For now though, it is improving.

Speaking about this event I would have really wanted to come with my coach. This all depends on sponsorship and if I brought my coach, I would have to cover all the costs. For the next tournament, it’s very important to find some sponsorship and hopefully before the Grand Prix in Mongolia.

Q: Batchimeg, you come from a family with a rich history of chess, where everyone plays it and holds FIDE titles, with you holding the highest, WGM. So at what age did you start playing chess and who encouraged you to take it further so that you would eventually become a WGM?

A: It’s true we have a rich history of chess in our family and everyone in my family plays chess. My father taught me how to play chess. When I was nine years old, I started to work with my coach Batsaikhan and still working with him now and he is the person who made me a Women’s Grandmaster (WGM).

Q: During the Geneva Grand Prix you defeated the current Women’s World Champion, Yifan Hou. Please describe the feeling you had and how much confidence you got from this game?

A: Defeating Yifan Hou was one of the happiest moments of the tournament and obviously it’s not an easy task to beat a World Champion. I just did what I had to do at the moment and just played the moves and played the opening I prepared.

Many Mongolians were supporting me and were really happy that I won against a World Champion. It gave me encouragement and confidence and that is no need to be afraid and just to play your chess.

Q: I noticed you are a FIDE Arbiter (FA). What made you want to become an arbiter and to get the title?

A: In 2009 there was an arbiter’s seminar in Ulaan Baatar, Mongolia and I had this opportunity to attend this seminar. I thought it would be useful for the future and I mean you are not going to play chess for your whole life so I would like to get some knowledge about being an arbiter. Later on I think I might be interested in organising events and maybe work within FIDE.

A: Since I was a kid I was a person who doesn’t sit on a chair and we always run around. Life isn’t always about chess right? I try to enjoy myself when I get bored. I really like to dance salsa and latin America dances. I listen to all types of music and I have a collection of different types of music.

In Mongolia, there is heaps of karaoke bars as everyone likes to sing. It really helps to relax and be stress free. I enjoy dancing with my friends once a month or so and I do dancing at home as well.

Q: I would like to take the opportunity to say thank you for chatting with the press and wish you all the best for the tournament.