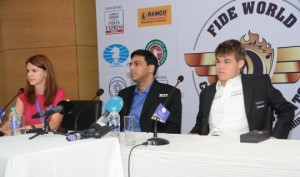 Anand vs Carlsen again, in round 1 of Shamkir 2015

The top chess tournament Shamkir 2015, in memory of GM Vugar Gashimov, has been officially opened in Azerbaijan. The drawing of lots took place at the opening ceremony and the first day match-ups are more than exciting. In round 1 we will see a repetition of the last two World Championships as Viswanathan Anand will play with the white pieces Magnus Carlsen. In the battle of the youngsters Wesley So will play Anish Giri. The other matches of the day are Kramnik – Adams, Mamedov – Vachier-Lagrave, and Mamedyarov – Caruana.

Magnus Carlsen was the winner of the 1st Vugar Gashimov Memorial tournament in April last year. He shared today at the press conference, “It is great to be back! I remember the first tournament was very well organized and as a chess player I appreciate the way we are treated here.” However, at the drawing of lots he was less than happy getting number 7, as that meant he will have five games with black and four games with white.

Wesley So, who had a dramatic US championship, shared that he is happy to be among the top chess players at this event and especially that he is glad to be playing next to the World Champion.

Vladimir Kramnik already had a taste of local culture. He managed to have a walk around the city and meet the local people. On the other hand, Anand, Wesley So, Fabiano Caruana, and Michael Adams had long flights and preferred to concentrate on upcoming games.

Stay tuned for updates in the next minutes on Chessdom.com!