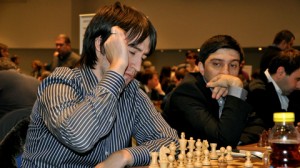 The defending champion from ETCC 2009, Azerbaijan, successfully started the campaign in Porto Carras by defeating Italy 2.5-1.5. Shakhriyar Mamedyarov provided an early lead by winning against Sabino Brunello. Meanwhile, Teimour Radjabov and Gadir Guseinov drew against Fabiano Caruana and the talented junior Axel Rombaldoni, respectively. Michele Godena was causing trouble for Vugar Gashimov on the second board. In the highly unbalanced game both players pursued their chances, but the duel eventually ended in a draw.

Replay all games of the round here / Photos of round 1

The top seeded team of Russia met fierce resistance from Moldova. Alexander Grischuk and Ian Nepomniachtchi made draws with black pieces and the team continued relying on the whites. Viktor Bologan, despite taking uncomfortable seating due to leg injury, held his ground against the World Cup winner Peter Svidler. Svidler cast worried look on the third board, where Alexander Morozevich had R+B versus Dmitry Svetushkin’s R+2P. However, Svetushkin apparently blundered a whole Rook and handed the overall victory to the Russians.

In the other matches, Olympiad winner Ukraine and World Champion Armenia easily walked past Slovenia and Austria, respectively, by a 3.5-0.5 score. Sweden held the favored France while Finland’s Mika Karttunen equalized the score against Netherlands.

Poland could not achieve more than 2-2 against the much-lower rated Lithuania. Radoslaw Wojtaszek skipped the match and his first board replacement Bartosz Socko lost to the Guernsey Open winner Sarunas Sulskis. Reigning Poland champion Mateusz Bartel evened the result.