The Beijing leg of the Grand Prix series 2013/14 is coming to an end. Shakhriyar Mamedyarov is alone at the top of the standings despite his loss in the tenth round against Alexander Morozevich. Alexander Grischuk also lost in the penultimate round and remains half a point behind. Peter Leko and Morozevich are the other two players with a theoretical chance of getting first place, as they sit at one point distance from the Azerbaijani.

Both Mamedyarov and Grischuk will have white in the last round and will play against very solid hard-to-beat opponents. The leader faces Boris Gelfand – who is having a comeback in the event -, while Grischuk will try to break the undefeated run of Peter Leko, who is the only player that does not have a zero in the crosstable of the tournament.

In the tenth round, Mamedyarov tried to avoid getting in trouble with the black pieces against Alexander Morozevich, but did not take into account how incisive the Russian can be when he has a tiny edge. Given the fact that Grischuk eventually lost his game as well, the Azerbaijani could have secured at least shared first with a draw. His loss keeps the tension until the last round, something chess fans are grateful about.

Morozevich opened without showing much ambition. Mamedyarov answered with a direct attempt to simplify the position and sign the draw as quick as possible. The Russian did not go for the split point and, instead, tried to squeeze something out of his space advantage on the queenside. The white rooks took control of the c-file and Mamedyarov decided to resign on move 41. 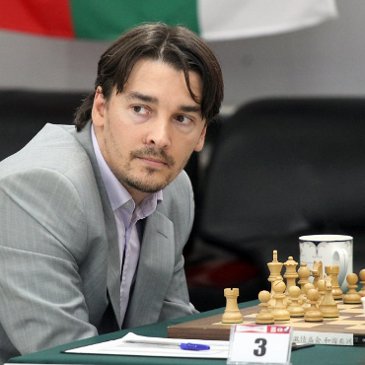 The other contender for first place also lost, but in quite a different way. Grischuk used the King’s Indian Defense to look for chances against Boris Gelfand. The Israeli’s only previous victory came precisely against this defense, when he beat Vassily Ivanchuk in the eighth round; the veteran used the same positional style to put down both rivals.

Grischuk did not shy away from the typical complications of the King’s Indian. He expanded on the kingside, expecting to get some kind of mating attack. Gelfand showed his great defensive skills and patience to avoid the danger and left the tactical struggle a pawn up in a knights endgame. By move 62, it was clear that the white pawns were unstoppable and Grischuk decided to resign. 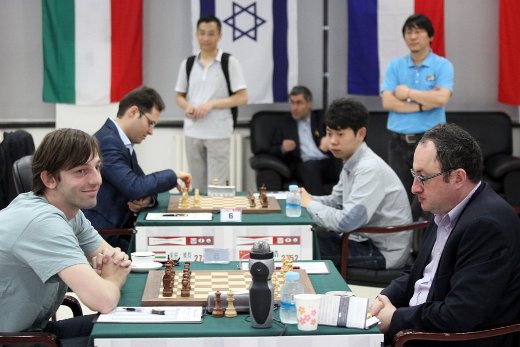 Gelfand – Grischuk with Leko – Wang Hao on the background

Anish Giri had the chance to take revenge for his miniature loss against Wang Hao a couple of round ago. The young Dutch GM only needed 23 moves to put down Veselin Topalov. The Bulgarian chose the Caro-Kann Defense and faced the Advance Variation. Following his dynamic style, the former world champion sacrificed a piece for activity, but had to accept that this was a bad decision when Giri started counter-attacking.

The other winner of the day was Gata Kamsky. The American signed his first win at this event playing white against Vassily Ivanchuk. The Ukrainian handled the black pieces correctly until he blundered on move 32. Kamsky’s rooks were ready to invade the opposite camp decisively and Ivanchuk decided it was not worth it to keep going. 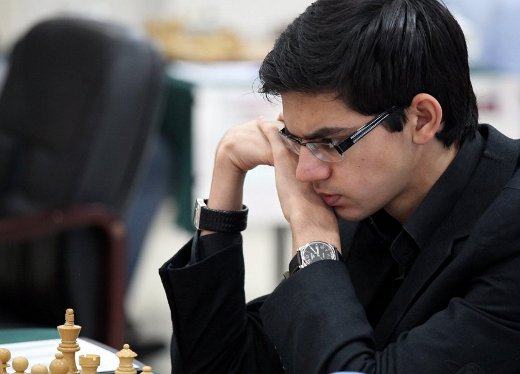 The Chinese players defended the black pieces successfully with black in their games against Peter Leko and Sergey Karjakin.

The last round will be played tomorrow and you can follow it live with computer analysis on Chessdom. 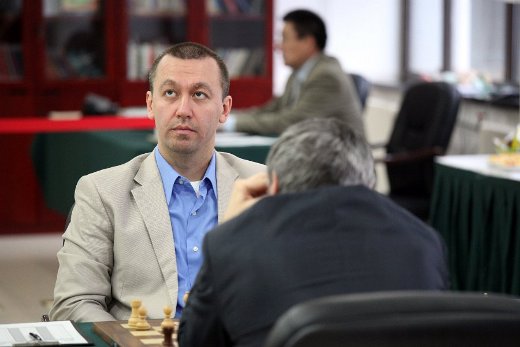