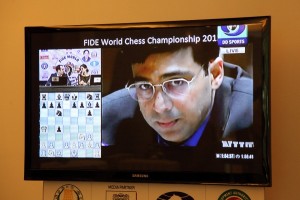 The FIDE World Chess Championship between the Norwegian “Mozart of Chess” Magnus Carlsen and the Indian “Tiger from Madras” Viswanathan Anand is scoring possibly the highest viewership and readership numbers for chess in history. Up to round 8 the match penetration has between 200M and 500M unique viewers, numbers difficult to evaluate with precision due to the vastness of the coverage and the worldwide distribution.

One number that we can cite with certainty is the TV coverage – more than 100 million people are following the match every day in India and Norway on TV, and additional estimated 100 million have been reached through TV news reports around the world.

India 80-100M daily: The India fans are following on DD Sports channel and satellite. Official numbers reported by the TV station itself range between 75M and 105M per day, depending on the length of the game. DD Sports has the exclusive TV rights and is reselling the signal and highlights to multiple TV channels, of which little statistics are available.

The total unique users over the 8 rounds so far are hard to measure, but the minimum is the 80 million viewers reported in a single round

Norway 500K – 1M: The TV coverage has over 20% penetration in the country. As the games are played during working hours, the simultaneous viewers number is not as high, but the total number of followers is significant. NRK, cited by Tarjei Svensen, reported that a total of 635 000 watched at least part of their TV coverage with expert IM Torstein Bae from 10:00 CET to 17:00 CET last Wednesday. On average, 180,000 followed the coverage.

Other countries 100M+ daily: Norway and India TVs certainly provide 100 million viewers to the World Chess Championship. However, that number can easily be doubled by sports reports in other countries. It is extremely difficult to evaluate the penetration of news coverage provided by the short 1-3 mins reports in TV broadcasters around the world. With or without picture from the playing hall, the match has been detected on TV news in 30+ countries in Europe and 50+ countries around the world according to a Chessdom.com inquiry. The number of countries is certainly higher, especially when adding the large internet video news coverage (for example the CNBC reports here )

Why is the viewership so high?

A combination of factors have contributed to the massive interest in the FIDE World Chess Championship. As a basis, chess is the second most popular sport in the world according to an IOC study in 2005, with interest by 600M+ people (a study confirmed by YouGov http://www.fide.com/component/content/article/1-fide-news/6376-agon-releases-new-chess-player-statistics-from-yougov.html). The fact that a 4 time FIDE World Champion and legend in India is playing against an emerging young talent from the Western World that broke all records before the age of 22 has put a high duality in the encounter – clash of generations youth vs experience, a battle of the worlds East vs West, and a clash of styles traditional vs computer era chess are only a few to mention.

Until round 8 viewership penetration numbers are ranging between 200M and 500M people (100 to 200M contributed by TV, and the rest by mainstream printed media and internet), while depending on the development of the match the penetration can reach 1 billion people.