The Monaco FIDE Women’s Grand Prix 2015 entered today into the second half, and some ladies probably start to be a bit tired. In round seven, no less than three games finished with draw by repetition, but in a very different way.

Nobody wanted to take a risk in the game Cramling vs. Mariya Muzychuk and it was a fast draw in only 13 moves. The game between Skripchenko and Stefanova was a bit longer, but still quiet equal and the final draw looked like a very logical result. Kosteniuk and Anna Muzychuk were the last to finish their game, also by three time repetition, but in a beautiful fight without compromise. Pogonina was very inspired and won her second game in a raw, this time versus Sarasadat Khademalsharieh. And the favorites, Yifan Hou and Humpy Koneru, won again, against Dzagnidze and Zhukova respectively, and now both are leading with 5,5 out of 7.

As Pia explained at the press conference she wanted to play solid with White. She chose the firm English Defence that later transformed to a very theoretical position with an isolated pawn, a line that could happen from many openings. Mariya didn’t want to take any risk 9…f6 (instead of 9…Be7) and decided to repeat the position and make a draw in 13 moves.

Skripchenko chose a quiet line in the Italian game with 5.d4 and 6.cxd4. Later Stefanova stepped out of the main theory with the move 11…Bg4 (the main line is 11…Nb6). Some tactics were possible after 15…Qxa2, but it seems like both players calculated the forced lines leading to an equal endgame, and went for it. Draw in 27 moves.

Sarasadat prepared a surprises variation with 3…g6 versus the Ruy Lopez. But Natalija reacted well, and in the middlegame she got some little initiative. The knight on e7 was very bad situated and Black had to lose a lot of time trying to improve its position. But just after obtaining this goal, Sarasadat made a terrible blunder on move 27 and lost immediately.

Natalia repeated the same interesting line 9…e5 versus the Anti-Meran Defense, like Stefanova played versus Pogonina in round 5. But Koneru played in a different way, with 10.Rd1 followed by a straightforward plan: 16.f4, 17.e4 and 18.e5. Soon it became clear that Humpy had won the theoretical duel. The trade of queens didn’t solve all black problems and at the endgame Koneru got a pawn up with good chances to win. The game finished with her fast victory after a final blunder 33…Kh7.

Nana played the Winawer variation of the French Defence, and very soon made a mistake 10…0-0? (Instead of the very playable 10…Nbd7 or 10…Nc6). After that move her position was worse for the rest of the game. As the Georgian confessed at the press conference, she missed 11.Bf4 e5 12. Bxe5 Re8 13.0-0-0! After this move she cannot get the sacrificed piece back because of the weakness of her 8th rank.  Later, Hou did not give any chance to survive and on move 49 Dzagnidze resigned.

An interesting and complicated game was played in the Dragon Variation of the Sicilian Defence. After a very unclear middlegame, the fight went to an even more unclear endgame, with queens and rooks on the board. It was a pawn’s race in which it was difficult to say who was better after each move. The game finished by perpetual check in the move 53. 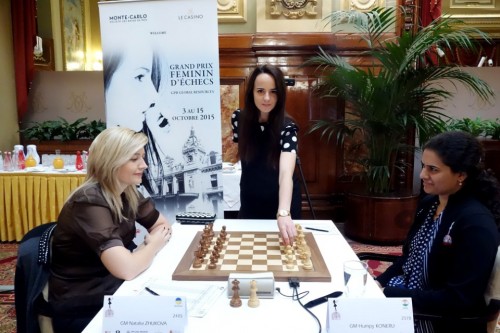 The model of the official placard of Grand Prix in Monaco, Juliette Rapaire,
making the first move in the game Koneru-Zhukova 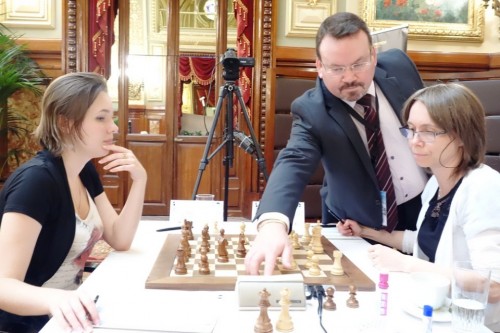 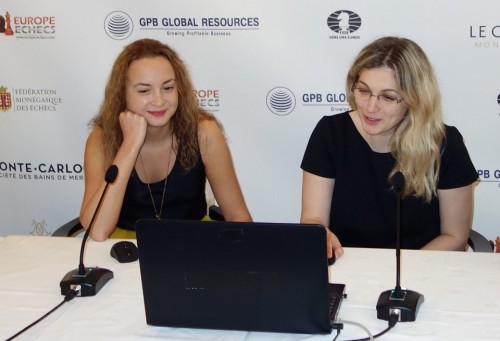 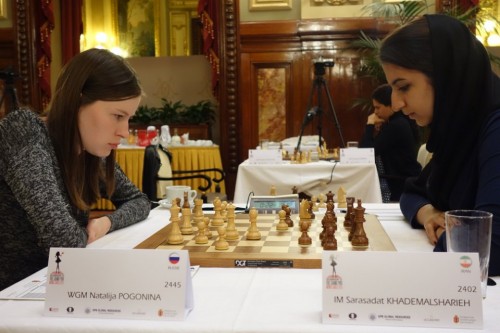 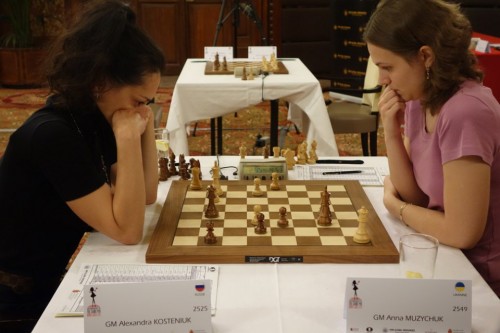 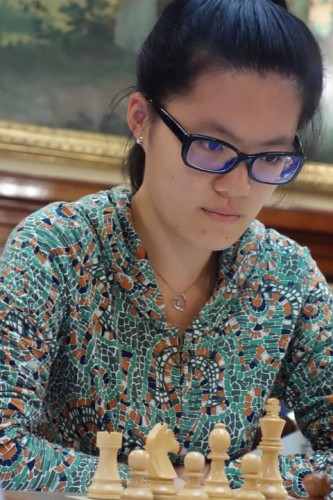