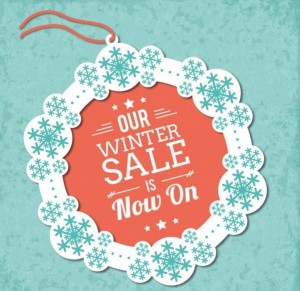 The holiday season is fast approaching and at Chessdom we are ready to celebrate it with special packages, holiday exclusive products, bundle packages and all with up to 50% discount!

Every day from today 07.12 to 25.12 a product will be announced. Do not miss our great daily deals. These unique offers will be available only at the Chessdom shop

Special offer #1 – Modern Chess Magazine in pdf and pgn, all issues with 43% discount

This is by far the best selling, most valued, and appreciated product of the year 2015, that is why it deserves to be first in our list of special December deals. The package includes all four issues of the Modern Chess Magazine (for download in pdf and pgn) with a 43% discount.

Click here to get all issues of Modern Chess discount pack

In an educational approach, Modern Chess articles are interrelated, each one of them being a part of a comprehensive course on a specific topic including opening repertoire based on original and rich of new ideas analyses, high level understanding on the Grandmaster thinking process, complete knowledge on the basic pawn structures arising right after the opening, and revolutionary methodology of studying the endgame. 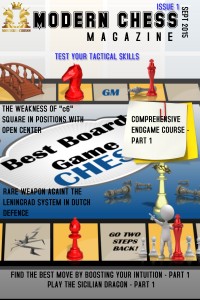 Have you ever heard the saying “Strong players win their games mostly in the endgame”? Well, we must admit that it is true, because the learning of the final phase of the game requires a lot of work and practice.Moreover,endgames are so complex, that an inexperienced player easily gets lost in the variety of information.That is why GM Davorin Kuljasevic comes up with his comprehensive endgame course.Regardless of your level, you have the chance to take a structured grandmaster education in the field of the endgame.

Sometimes we are really astonished by the way in which top grandmasters calculate variations.Is it really all about calculation? Bulgarian grandmaster Boris Chatalbashev disagrees. In his course, concerning the initiative, he proves that we can often find the best move in complex position by boosting our intuition. After reading his first article, you will feel the razor thin balance between strategy and dynamics in modern chess.

Almost every 1.d4 player has encountered some problems facing the Leningrad system in Dutch defence.The complexity and the flexibility of the arising pawn structures makes the Dutch one of the favourite openings of original players like Nakamura, Bartel and Malaniuk. Being an exclusively 1.d4 player, GM Grigor Grigorov shares with you the secrets of his repertoire against that dangerous variation. His system is based on 6.Nbd2 followed by 7.Re1 and e2-e4.Despite of a rare choice, this line is complitely sound from positional point of view and often has a suprise value.

Some players are really not confident when they face a well prepared 1.e4 player.It is quite often the case when it comes to the razor sharp Sicilian defence.Being aware of that problem,the Dragon expert IM Spas Kozhuharov decided to create a repertoire concerning his beloved opening variation.His first article deals with the main line, where white plays 9.Bc4 followed by 0-0-0.After reading the expert analysis of IM Kozhuharov, you will realise that the Dragon is not such a risky opening when we know it is positional basics.

Have you ever thought about the secrets of Soviet chess school? What makes russian chess players so powerful? No need to wonder anymore! The 1985 URSS champion GM Viktor Gavrikov is here to reveal the basics of the greatest chess school in the world. His first article concerns the positions with open center and marks the beginning of a complete middlegame course which deals with all the basic pawn structures.Good structural knowlede will enhance your opening understanding.

At the end of the first issue of Modern Chess Magazine, we bring to your attention some tactical puzzles prepared by GM Petar Arnaudov. 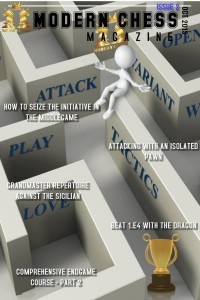 In the second part of “Endgame Series” GM Davorin Kuljasevic explains importance of pawns in endgames through interesting examples from both classical and modern Grandmaster practice. Start with the impersonation of the famous movie “Searching for Bobby Fischer”, go through the classical theoretical positions from 70’s and 80’s and find out how Polish GM Bartel used impeccable endgame technique to defeat World #28 Navara. And, of course, make sure to “Test Yourself” at the end of the article. 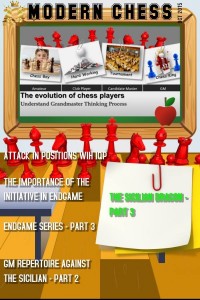 In issue 3 of Modern Chess Magazine, our GM team provides you again with high quality content, with is a part of a structured chess education. Here is a brief review of the artciles that you will find on the pages of our magazine:

And last but not least…

Modern Chess (December) – which will be published tomorrow and you will be the first one to receive it! Get your discount package here and stay tuned for more special offers tomorrow 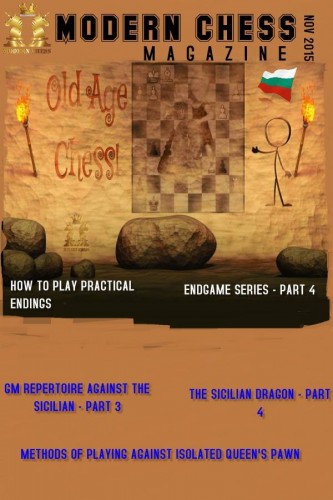