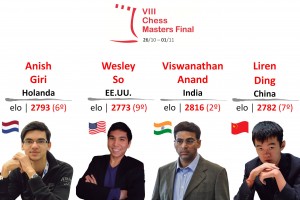 The Bilbao Chess Final Masters 2015 will take place 26 October until 1 November in Bilbao, Spain. The Dutchman of Russian origin, Anish Giri (21 years old and ranked sixth internationally), the Chinese man Liren Ding (22 years old and ranked seventh) and the American of Philippine origin, Wesley So (21 years old and tenth in the classification) are the new blood of the world chess elite. Opposite them on the other side of the chess board and providing an exciting intergenerational clash, the veteran five times world champion and defending tournament champion, Viswanathan Anand, 45, from India. These four players comprise the attractive line up for the latest and eighth edition of the Bilbao Grand Slam Masters Final presented today in the capital of Biscay.

The tournament, one of the main events on the international calendar, will take place in the Campos Elíseos Theatre from 26 October until 1 November, coinciding partially with the VI Individual Ibero-American Championship. The latter event will last another two days until 3 November and will involve up to 200 players. This double sporting event, referred to as Bilbao Chess 2015, will once again convert the capital of Biscay into the capital of world chess.
Viswanathan Anand, the five times world champion and defending champion, was the winner of the last edition of the Masters Final which, under the title Bilbao Chess 2014, took place at the same time as the chess European Club Cup.

This year’s edition of the Grand Slam Final will be held in its headquarters in Bilbao and will be played with all players facing each other over two rounds. In accordance with revolutionary rules which differentiate the Bilbao tournament from other international tournaments, a spectacle will be guaranteed in every game: the so-called “Sofia Rule” will again be applied, establishing that only the referee will have the power to determine whether a game is drawn or not, thus avoiding pacts between players. On top of this, a scoring system similar to football will also return, awarding three points for a win, one for a draw and no points for a defeat. This system was used for the first time in an elite tournament in the 2008 Bilbao Masters Final and is known as the “Bilbao Rule”.

The event presenting the Final has taken place with the presence of the two main sponsors of the tournament, the Bilbao Town Hall and the Biscay Provincial Government. Representatives of these institutions, the Director of Bilbao Ekintza, Nora Sarasola, and the Regional Director of Tourism, Asier Alea, both highlighted in their speeches the importance of this type of sporting event not only for the economy but also for the image of the city and of its historic territory.

Continuing the double-event model successfully put in place last year, Bilbao Chess 2015 will bring together not just four of the ten best players in the world, but also around 200 players from 23 countries who will dispute the Individual Ibero-American Championship.

As in previous editions, the two competitions will be transmitted live by internet via the official webpage of the event, www.bilbaochess2015.com, and through the main international chess web portals. Last year’s combined audience of these sites exceeded ten million spectators around the world.
In brief, the track record of the four competitors of the Bilbao Masters Final is as follows:

• Born in Saint Petersburg (Russia) in 1994, but with Dutch nationality.
• Son of Nepali father and Russian mother, he won the Netherlands national title at the age of 15.
• Champion of the Reggio Emilia Italian tournament in 2012.

• Born in Wenzhou (China) in 1992.
• The standard bearer of the new world chess power, China, he won his country’s national senior championship at just 16 years old, a victory that he repeated, unbeaten, in 2011 and 2013.
• Olympic Gold medal with his national team in the last Chess Olympics in Norway in 2014.

• Born in Las Piñas (Philippines) in 1993, but with United States nationality.
• An Olympian at 12 years old, he surpassed the current world champion, Carlsen, by being at 14 years of age the youngest chess player to reach the level of 2,600 ELO points.
• Amongst other international tournaments, he has won the Dubai open (2008), the Reykjavik open (2013) and in 2014 the Memorial Capablanca of Havana, the Golden Classic of Bergamo (Italy) y the Millionaire Chess open of Las Vegas.