For the sixth consecutive year, Bilbao (Spain) will host in 2013 the Grand Slam Chess Masters Final, as announced today by the Organizing Committee in Wijk aan Zee, where is being held the first of the top level tournaments which make up the Grand Slam, the Tata Steel tournament.

Preceded by the success of its innovative competition format, the Bilbao’s Tournament, considered as one of the most prestigious in the world, has gained the support of the rest of the top tournaments which make up the Grand Slam, to be the venue of the sixth edition of the Chess Masters Final.

The Grandmasters who are participating during these days in the tournament of Wijk aan Zee, including the World Champion Viswanathan Anand, current world number one Magnus Carlsen and Olympic Champion Levon Aronian, have also shown their willingness to participate in the Final, as they have done in previous editions.

The Grand Slam Chess Masters Final 2012 which was held between mid-September and mid-October via a double round robin league in Sao Paulo (Brazil) and Bilbao (Spain), was won by Magnus Carlsen, after his triumph in a very exciting tie-breaks against the Italian-American Fabiano Caruana during the last round of the tournament. 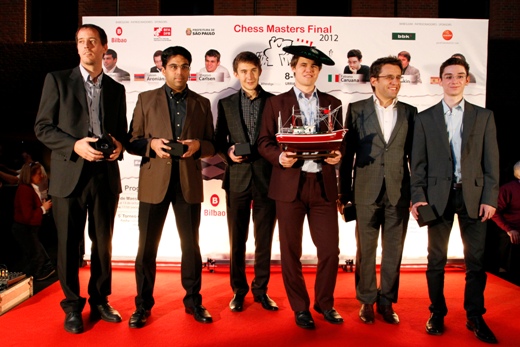 The Organizing Committee of the Bilbao’s tournament have indicated their intention of maintaining the same dates for the edition of 2013, between mid-September and mid-October, the same dates as in the previous editions and which have allowed Bilbao to gain a place in the international chess calendar.

However, the organizers of the Grand Slam Chess Masters Final urge the Chess International Federation (FIDE) to hold discussions in order to establish a negotiated, reasonable and balanced calendar where interests are represented and safeguarded, not only those of the FIDE but also the ones of the top level tournaments, players and fans. The current calendar is unilateral and vague, in the opinion of the Bilbao’s Final.

Organization could lead to the disappearance of some of the most important tournaments due to the clash of dates of some of them, and this is negative for the viability and dissemination of a millennial sport as chess, specially at difficult times of severe economic recession such as now, they have stated.