The traditional Blitz Pairs event at the 2014 Tradewise Chess Festival took place at the Caleta Hotel on Sunday night.

Once again this very popular six round contest drew in the players. There were 38 teams competing of two players each. This included five Grand Masters and eight International masters and other titled players. 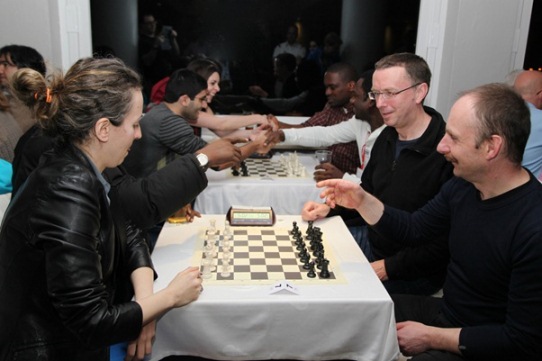 And it was strong competition with three teams ruling the night and finding themselves in a three-way tie at the end. The teams were: Captain Blunder and Crew with Noel Studer and Jan Rindliseacher, 9ja with John Oyeyemi Fawole and Kolawole Akinyemi Ladokin, and Sons of Bishops with Aryan Tari and Sebastian Mihajlov.

Once again, host for the evening, tournament director Stuart Conquest who also participated in the event, said it was another challenging and entertaining night.

“It so great everyone can relax in such an event and make new acquaintances. The Blitz Pairs was halfway through this year’s tournament and it always helps to ease the way into the second week of competition which will increase in intensity as the final rounds get closer,” he said.

The Chief Minister of Gibraltar Fabian Picardo presented the prizes to the winners of the Blitz. Also in the picture: Stuart Conquest, Stephen Boyd and Laurent Freyd

The prizes were presented to the winners by Gibraltar’s Chief Minister Fabian Picardo who visited the festival. All results and team compositions plus photos can be found on the tournament website.