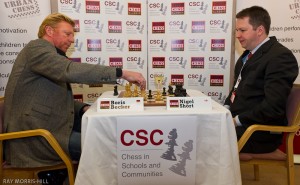 The greatest ever line-up of chess players at a major British tournament featured today at the 2011 London Chess Classic, as four of the six highest-rated players of all time came to the capital.

The surprise addition to the star-studded line-up came in the form of tennis legend Boris Becker, who joined the likes of world chess no.1 Magnus Carlsen and the current world champion Vishy Anand, when the action started at Kensington’s Olympia Conference Centre.

Becker, a six-time tennis Grand Slam winner, played the ceremonial first move on behalf of Carlsen and then pitted his wits against former UK chess No.1 Nigel Short. Boris’ love of chess is no secret as he once famously played Garry Kasparov live on CNN and played the game to focus his mind ahead of big tennis matches. Despite a bold opening from Becker, Short, a former world title challenger, eventually emerged victorious.

Becker said: “Chess is much like tennis as it involves being one-on-one against your opponent and having to plan ahead. There’s a lot of strategy involved and elements like shaking hands before you begin teaches fair play and sportsmanship.”

This year’s Classic sees a particularly strong line-up vying for the main prize. Carlsen remains the hottest property in world chess and is back to try and lift the London Chess Classic trophy for a third time. In 2009 he used the London Classic as his launch pad to become the youngest player ever to reach the top of the world rating list. Vishy Anand has been undisputed world chess champion since 2007 and his fans will be eager to see how he performs in London. 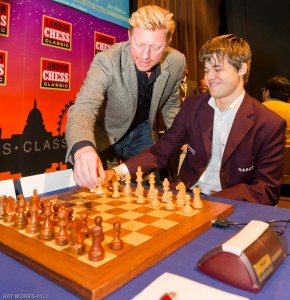 Another tie to watch out for is Levon Aronian against Hikaru Nakamura in round two on Sunday. This sees the world number three and the reigning World Blitz Chess Champion come up against the aggressive playing style of Nakamura, who has risen quickly through the world rankings under the tutelage of Garry Kasparov.

The tournament is again being brought to the UK’s capital by the charity ‘Chess in Schools and Communities’. CSC, a registered charity which promotes the playing and teaching of chess in schools, will also host a ‘chess festival’ at the event which will feature five days of free school activities and tournaments, which over 1000 children are expected to attend.

All proceeds from ticket sales will be donated to the CSC charity. To buy tickets and for more information on the CSC initiative, please visit: www.londonchessclassic.com and www.chessinschools.co.uk.