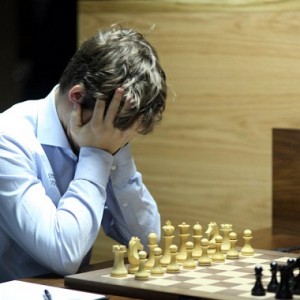 Magnus Carlsen will probably lose, but anyway get first place

Probably nobody predicted the scenario that has presented itself at the decisive round of the Candidates Tournament in London.

Vassily Ivanchuk and Peter Svidler left the time-trouble struggle with winning positions against the leaders. If they are able to convert their advantages, Carlsen will be the overall winner of the event.

Update: Both Carlsen and Kramnik lost, finishing in tied first place with 8,5 points each, but Carlsen becomes the next World Championship challenger!

When the games approached the 40th move, Ivanchuk and Carlsen, who have the white pieces, got in huge time-trouble. This is no surprise in the case of the Ukrainian, while it is almost never seen in Carlsen’s games.

Vladimir Kramnik, recognizing that it was possible for Ivanchuk to lose on time, tried to complicate the matters on the kingside, but Vassily reacted correctly, refuting all threats and maintaining the pressure on the queenside.

When the smoke cleared, the Ukrainian was left with a very strong passed b-pawn in what is an easily winning position.

Magnus Carlsen started to put pressure on Svidler’s king at around move 30. The Russian defended precisely and looked for counterattacking opportunities, showing how well he plays in very dynamic positions.

Magnus blundered with 31.f3, allowing Svidler to jump Nf4. After the simplifications took place, the winner of the last World Cup was a pawn up and had the advantage of the pair of bishops.

Update: After the end of the round, Carlsen said at the press conference – “I didn’t want to resign before I was sure that Ivanchuk will win” and “For me the last three rounds went a bit out of control”.