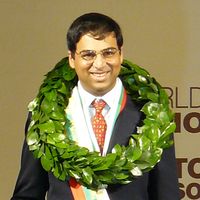 All members of the current 2800+ club – Anand, Carlsen, and Aronian, as well as the ex world champion Vladimir Kramnik will participate in Botvinnik Memorial 2011.

The participants of Men’s section are Viswanthan Anand, Magnus Carlsen, Levon Aronian and Vladimir Kramnik and in the Women’s section the players are Koneru Humpy, Tatiana Kosintseva, Viktorija Cmilyte and Elina Danielian.

The tournament will have two parts. The first part is a double round robin Rapid Competition (6 rounds), with a 25min + 10sec time control and the second is a simultaneous exhibition of the players where each will play on 10 boards.

All games from the Botvinnik Memorial 2011 will be with computer and grandmaster analysis at the live games platform.

Games from Botvinnik Memorial 2011 commented by the players

The main surprise of Botvinnik Memorial 2011 will happen in the middle of every game – clocks will be stopped and players will analyse the game for the audience. While one of the players reveals the ideas on the analysis board, the other will listen to music.