For the seventh year running, The Chess Team at The University of Texas at Brownsville and Texas Southmost College will travel the day after Christmas to compete in the 2012 Pan American Intercollegiate Team Chess Championship from Thursday, Dec. 27 to Sunday, Dec. 30.

The results of the tournament, hosted this year by Princeton University in Princeton, New Jersey, will determine the collegiate championship for the Western Hemisphere. This is also the qualifying tournament for the 2013 President’s Cup, known as the Final Four of College Chess.

The top four U.S. universities at the tournament qualify for the Final Four, to be held April, 6-7, 2013, in the Washington, D.C., suburb of Herndon, Va.

“It looks like the competition is going to be extremely strong this year,” said Russell Harwood, Chess Program Director. “In addition, we lost our top player when he graduated a year ago. Also, the team has been without a coach since April, but I am proud of the way our players have rallied and are working hard together to prepare for this tournament.” 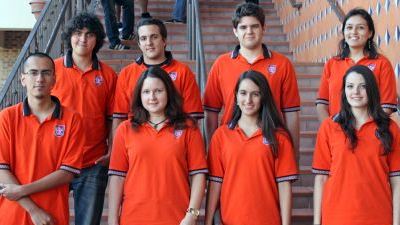 The University of Texas at Brownsville

According to Harwood, the team will face its long-time competitors at the Princeton tournament: The University of Texas at Dallas, Texas Tech and the University of Maryland-Baltimore County. He anticipates considerable competition this year from Yale and Lindenwood University in St. Charles, Missouri. Harwood said the team is also eager to play against Webster University in Webster Groves, Missouri, considered to be a new powerhouse in collegiate chess.

“We feel the competition will be greater this year, and we have been training amongst ourselves in preparation for this big tournament,” said team captain Axel Bachmann. “Hopefully, our new coach will arrive in time to accompany us to Princeton, but if not, we are prepared to face our rivals.”

Harwood said the tournament will be played in a true team format where four players from one team play against four from another.

“Our main goal is to get into the top four to qualify for the Final Four Tournament,” Harwood said. “We definitely have a shot to qualify, but it will be a challenge.”

Harwood and Douglas Stoves, Director of Residential Life and the Student Union, will accompany the team to Princeton, departing at 6:30 a.m. on Wednesday, Dec. 26, from Harlingen International Airport.

The university team has seen fast success in the chess arena after it started competing in 2001. The team won the National K-12/Collegiate Championships in 2005. The University was named Chess College of the Year by the U.S. Chess Federation in 2007. At the 2010 Pan Ams in Milwaukee, the team tied for second place, positioning it for the Final Four in April 2011, where UTB finished third, just one point away from first place. The Chess Team also holds the honor of being the 2011-12 Texas State College Chess Champions.

Daily updates about the Chess Team’s progress at the 2012 Pan Ams will be posted on the Chess Program webpage during the event, Dec. 27-30.