Bu Xiangzhi is one of the strongest chess players not only in his own country China, but worldwide. He became the World Chess Champion U-14, vice National Champion. Xiangzhi is a member of the National Chinese team participating in six World Chess Olympiads. He participates in the Asian Nations Cup 2016 in the team of China playing on Board 1.

ACF Media: Xiangzhi, welcome to the press office. Congratulations with your victory again. Did I forget to mention any victories that you have had in your pocket? 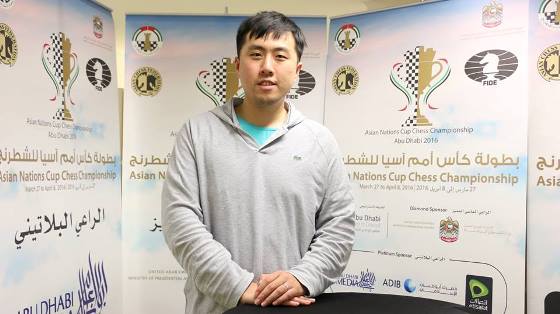 Xiangzhi: I am enjoying chess now. As for my general chess activities, I also teach chess to children in China. Teaching chess has a double profit: I help children to develop and also I help myself as well, For instance today in my game against Ghaem Maghami we played an opening which I remember I showed to my students some three years ago. So, I remembered it and it helped. Wang Yue is also working as a coach of Chinese children. This is a good thing to be in a good shape, we learn from it as well.

ACF Media: What was the easiest game to win for you during the on-going Cup?

Xiangzhi: My opponents in the first and second rounds were not very strong chess players. It was not difficult to outplay them. Yesterday I played against Nguyen Ngoc Truong Son and I managed to win. The thing is that Son is married now. He doesn’t have much time to train chess, I guess. So, this might be one of the reasons he lost (smiling). It happens to me too. I am married already for three years. After the marriage my rating went a bit down. I have a good family and I try to spend time with it. So chess is kind of at second place now.

As for today’s game, I think Ehsan just forgot some moves in the opening. He spent a lot of time thinking in a very simple position. He has made some mistakes and I had an advantage. After d4 I had a winning rook ending position.

ACF Media: So, Ehsan Ghaem Maghami is not married, his defeat cannot be connected with the marriage, right?

Xiangzhi: No, Ehsan is married too. So, you see, marriage influences chess performance in a way.

ACF Media: What do you expect from this tournament? Gold medal?

Xiangzhi: We still have five rounds to go. If I remember well, we play tomorrow with Indian team. It might be not that easy at all. Of course my team is very strong, we are together and we try to help each other. We try to win every match. But again, India is also a very strong team. There will be an interesting battle.

ACF Media: Thank you so much for coming, we wish you good luck in the tournament!