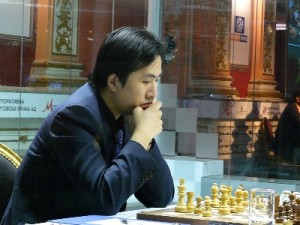 China arrived with a large delegation in Khanty Mansiysk and large ambitions for qualifying for the World Chess Championship 2013 challengers tournament via the top 3 sports at the World Cup. However, just after one round played 6 out of 9 participants from the Chinese team have to go home.

The biggest surprise of the day is the dropout of Wang Yue. The 2700 club member suffered a defeat yesterday against Alexandr Fier, and today could not make more than a draw losing the match 1,5-0,5.

Despite hard fights over the board the World Champion Yifan Hou, Zhou Jianchao, and Yu Yangyi lost with 2-0 scores. Li Chao is also packing for home, while Wang Hao could not arrive in Khanty Mansiysk due to health problems.

The bright hope for China remains the solid Bu Xiangzhi, who had no problems in game 1 and won by default game 2 against Ahmed Adly.

Ni Hua and Ding Liren will have to go through the lottery of the tiebreaks to fight for a place in the next round.