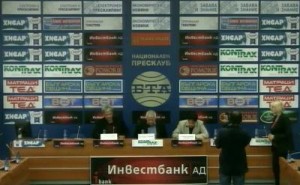 The press conference at BTA with Metodi Stoinev, Kiril Georgiev, and Simeon Stoichkov

It is not FIFA, but things look pretty grim for the Bulgarian Chess Federation. At a national press conference in the BTA studio the 2015 national champion GM Georgiev, FM Stoinev, and local organizer Stoichkov brought up shocking facts about the operations of the BCF and its relations with the previous management of ECU, during the time when Silvio Danailov was president simultaneously of both organizations.

In the press conference it became known that BCF is investigated for corruption by the local sports ministry and the country’s chief prosecutor, based on a report by the National Agency for Financial Inspection that cites inflated financial spendings, organization of false or nonexistent tournaments, unreasonable travel expenses, and mind-boggling amounts spent for security and ceremonies at events.

FM Stoinev has backed all reports with official documents and urged for publicity and legal actions.

These discoveries come only a few months after the local federation elections and are preceded by bribery allegations that hit the mainstream news in the country in the most popular standup and comedy show Masters of the Broadcast (see the report and video here). This time, however, the possible financial irregularities mentioned are much larger scale. Read on for the most important parts of the 80 minutes press conference.

* Note: all numbers are converted with approximation from BGN to EUR. The exact numbers mentioned at the press conference are available at https://www.facebook.com/metodi.stoynev/posts/10203793750994582

FM Stoinev: Dear guests, journalists, and colleagues from the chess world, welcome to this press conference. My name is Metodi Soinev and I am president of Marek Union Ivkoni chess club. With me are the six times national champion GM Kiril Georgiev and Simeon Stoichkov from sports club Ritzar.

The topic of today’s press conference is the large scale corruption at the Bulgarian Chess Federation. All that we will talk today will not be empty words, everything will be based on official documents : mainly the audit done by National Agency for Financial Inspection. All numbers provided will not be commented, just stated as concrete facts. 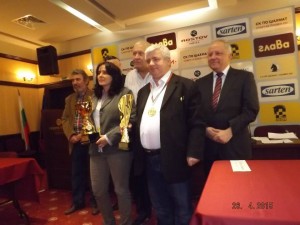 GM Georgiev: Dear ladies and gentelmen, in the past years strange things have happened in Bulgarian chess. Until recently no one knew about them, even we as chess players had no idea.

Last year the BCF created a scandal. Two open tournaments that are held annually, Albena and Golden Sands, were proclaimed to be European Cups of Chess. Thanks to the newly acquired titled, the Ministry of Sports provided state funding of 220 000 eur. […] In an official letter by the ECU and its current President Zurab Azmaiparashvili it is confirmed that these events have nothing to do with the European chess calendar and we are facing a major infringement […]

From 2011 the BCF has turned into a money laundering machine. There is solid proof for this, and the major infringements are described by the National Agency for Financial Inspection which made an inspection for the period January 2011 to September 2012. This report has been kept secret from us for several years.

Yet another violation is the registration of an illegal European Chess Union. The registration is made on the 4th of May 2011 in an offshore zone of Delaware, USA. For those years the abuse is for more than 1,5 million eur […]

There is an ongoing investigation and via their website ECU warned national federations that there is only one European Chess Union and its official bank account is in Switzerland and not USA.

FM Stoinev: Let me add to what Kiril Georgiev is saying about the false European Chess Union. The idea has been to create a company with the same name, just adding the ending “Ltd.” – European Chess Union Ltd. It is still unclear who are the people in this company, but ECU warned it is criminal activity.

Federations like the one in Montenegro have made transfers to this company rather than to the official ECU. Therefore, the ECU President Zurab Azmaiparashvili warned everyone to be careful with this false European Chess Union.

Now here is something very interesting. In 2011 and 2012 when Bulgaria organizes two European tournaments, the National Agency for Financial Inspection reports that “The Bulgarian Chess Federation has paid 375 000 eur taxes to the European Chess Union and other chess unions”. Is it a coincidence that we read “other chess unions”? It must be there on purpose as BCF is member only of one ECU and FIDE.

And the amount is clearly inflated as the normal taxes towards FIDE and ECU are maximum 35 000 eur annually […] Next year the same story continues! The amount is 200 000 eur – probably they did not have more and the amount is less.

Based on these numbers we have sent a signal to the Chief Investigator of the country Sotir Tsatsatov (http://www.novinite.com/articles/146728/Sotir+Tsatsarov+Sworn+in+as+Bulgaria%27s+Chief+Prosecutor) and there is an ongoing investigation for these irregularities.

The big problem is that this is not all the money in question. For example in 2011 the amount of 125 000 eur has been paid for the “frequencies jamming, chess clocks, and boards” […] and the contract for providing these services is with the European Chess Union. There is no such practice in chess, as these services have to be provided by the host himself. What’s more, frequency jammers are forbidden by law in Bulgaria without the official permission of the National Security Agency and the Interior Ministry.

More shocking facts coming. For the European Youth Championship in Albena the rent for the playing hall is 125 000 eur. For those who have seen the balloon-type hall this is unbelievable, especially having in mind that the rent for the most modern hall in Sofia is 15 000 eur.

As a President of Marek Union Ivkoni chess club I have been asking two years in a row for a financial report at the BCF general assembly. Deputy Nikolay Nedkov refused to give such report as he “doesn’t want to reveal the federation’s sponsors”. Such practices lead to severe corruption – no reports and uncontrolled expenses.

These are all numbers from 2011 and 2012. We do not know what has happened in 2013 and 2014. All that we tell you are public facts, we have much more information. But in order not to impede the legal procedures we will not reveal them until official documents are out.

With this press conference we state that things should not continue the same way. We will initiate proceedings for extraordinary assembly of the BCF where these people should give a detailed report for their deeds and to have a change in the governance. […] Before I have not had direct proof for what is happening, even though I suspected them, now the proof is here. These people have to be swept out of the Bulgarian chess community. 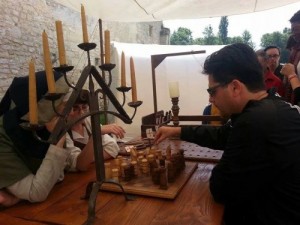 Simeon Stoichkov in a promotional events

Simeon Stoichkov: In the general assembly in Bankia last December I was struck by the arrogant behavior of the current leaders of the federation. They reported a very successful period after which they kicked out the journalists […]

The assembly continued and one of the questions I asked was about the arbiters appointments […] At one of the European events that FM Stoinev mentioned there were 43 arbiters assigned. Many of them did not attend the events.

The other thing that surprised me was the account of BCF as co-organizer of the Sofia Team Championship “Zlatna Peshka” which I have organized for the past eight years. […] In no way BCF helped the organization of the tournament and I really hope there are no additionally reported arbiters, presents, etc, Besides the 300 players and 50-100 parents, we also have video surveillance and we can prove with what BCF has “participated”.

FM Stoynev: I want to add something, when the financial inspection of the federation was made, the people checking the documents do not have much idea what really stands behind the contracts. They certainly could not have imagined that there can be an unreal tournament, as the European Cup in Albena.

With Kiril Georgiev we played at these tournaments and we never understood it is a “European Cup”, we thought it is just another open event.

I played with people from Singapore, Indonesia, India, Paraguay, and Brazil. All official European events the players have to be from Europe. While the Ministry of Sport has given 220 000 eur…

You see what are the amounts in question and what corruption there is in this federation. We have to say stop, to make this things public, and to start a serious investigation. […] There are already ongoing legal procedures, so this impedes me to give you more information than the one in the public report.

* End of press conference main part, see the full video of the event here. Chessdom will continue to follow the case, stay tuned for more reports later this week.