While all four games of the round were drawn it seems the biggest move of the day happened during the post-game interview with GM Hans Niemann, as he passionately responded to the recent speculations made about him following Carlsen’s departure from the Sinquefield Cup.

Niemann admitted to cheating online in the past, but claimed that he had learned his lesson and has never cheated in an over-the-board game. Niemann then accused Carlsen, Nakamura, and Chess.com of targeting him in the must-watch interview. See the complete interview with GM Hans Niemann here

Heading into the rest day, GM Wesley So continues to lead the event with 3.0/5, with four rounds left to play. Check out the full replay of live coverage from the day here. The time control for the event is 90 minutes for 40 moves plus 30 minutes for the rest of the game; with a 30-second increment starting from move 1.

Another quiet Italian left Niemann a bit worse out of the opening, as he tried the unusual 11…c5 but ended up with a passive position. A further mistake (15…Bb8) by Niemann allowed Dominguez to seize a serious strategic plus, with more space and control over the c-file. Dominguez increased his advantage to a decisive one in the endgame, but a poor decision to trade off the knights allowed Niemann back into the game, as he then held the rook endgame with ease.

Incredible “high-tech” preparation in the Ragozin Defense by Caruana left Mamedyarov nearly 50 minutes behind on time, as he tried to navigate through all the complications. The critical moment came on move 22, when Caruana offered a queen sacrifice  (22…Qxf1+) with his full 90 minutes still on the clock. Mamedyarov declined the sacrifice, opting instead to go into a very drawish endgame a pawn down. After the game Mamedyarov explained his decision, indicating that “when your opponent knows everything”, “it is better to be down a pawn than with an extra queen.”

A theoretical Petroff saw Nepomniachtchi demonstrate excellent preparation to neutralize MVL’s attempts for an advantage. While the endgame looked a bit worse optically for Black, in reality there were no issues and Nepo held without particular trouble.

After the game, Vachier-Lagrave commented on the reaction to Carlsen’s withdrawal from the Sinquefield Cup, referring to the recent treatment of Niemann as a “witch hunt”: 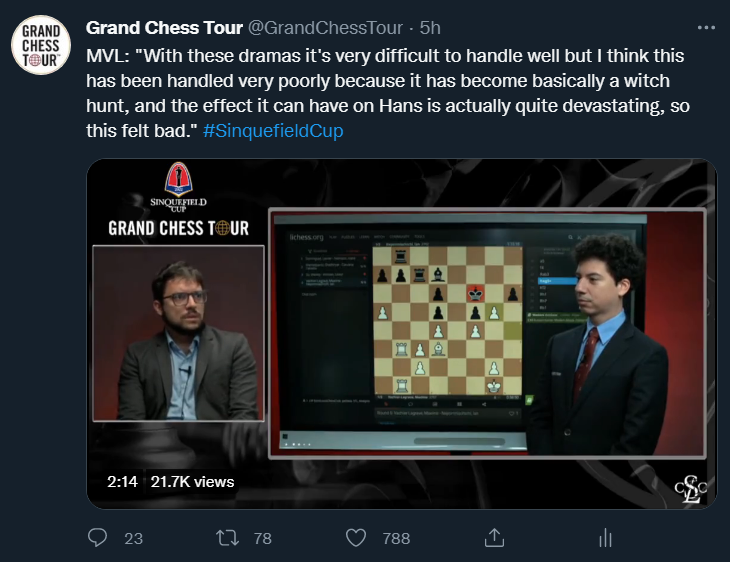 A Catalan featuring 5…c5 saw the players head for a theoretical endgame, with a small edge for White but not more. Around move 17, Aronian decided to sacrifice a pawn, which So accepted but at the cost of his own development. As a result So was never able to fully mobilize, and eventually gave the pawn back to force a draw.