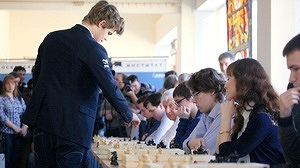 World Chess Champion Magnus Carlsen will be the main star in an epic three-hour long entertainment show on NRK1 on Sunday 30th November. All Norwegians will have the opportunity to play against the chess king.

Magnus Carlsen recently returned from Sochi, Russia, after winning the World Chess Championship for the second year in a row.

Now he will play against the Norwegian nation through the free app “Kongen av sjakk” (King of Chess) and also against the select group of people in NRK studio.

– “This is a really fun concept and I’m looking forward to be part of it”, Magnus Carlsen said.

Expert commentators are Torstein Bae, Heidi Røneid and Ole Rolfsrud. They will also talk about the “fun facts” and statistics will be presented on the big screen.

Magnus is ready for battle. Are you?