The 2013 Canadian Youth Chess Championship will be held on 10-13th July at the National Hotel and Suites Ottawa, 361 Queen Street, Ottawa, ON K1R 7S9.

The tournament format is six-round Swiss over three days with the time control 90m + 30s per player.

$150 of the entry fee is collected on behalf of the CFC and used by the CFC to fund the travel costs of the section winner to the WYCC in accordance with the rules established by the CFC. 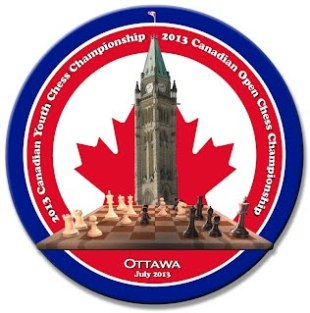 Each contestant in a Canadian Youth Championship must fulfill the age requirements specified by FIDE for the World Youth Championship to which the winner of the Canadian event will qualify. Age as of January 1st, 2013 is used to determine which section a player is eligible to enter.

Qualifiers to the CYCC:
Qualification Tournaments – qualify from a Regional or Provincial qualifying event such as provincial YCC.
National Rating – be one of the top 10 CFC rated in Canada in your category (as of May 1, 2013).
Provincial Rating – have the highest CFC rating in your province in your category (as of May 1, 2013).
Previous Champion – be a previous CYCC champion.
Previous WYCC Qualifiers – qualified to the WYCC from the previous year’s CYCC.