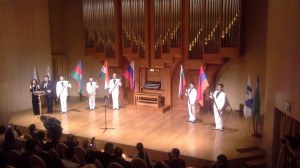 The Candidates Tournament 2014 has been officially opened in Khanty Mansiysk. In the presence of the FIDE President Kirsan Ilyumzhinov, the flags of the participating countries have been brought to stage, followed by a musical program.

Expect all photos in the gallery here and updates to this report in a few minutes.

With the start of the Candidates, the preview issue of Chess Insider PDF and PGN chess magazine has been published too. In the issue #5 you can find analysis of some of the most exciting recent fights between the players, including Aronian – Anand from Zurich and Mamedyarov – Topalov from ETCC. And as the winner of the Candidates will play Magnus Carlsen in the FWCM 2014, we present you a bonus game analysis of the current World Champion from his tournament in Brazil.