Viswanathan Anand took a practical decision to accept draw against Dmitry Andreikin in a better, but extremely complicated position. Considering the other results, Anand is coming closer to challenging World Champion Magnus Carlsen to another match.

After 12 rounds of play in the FIDE World Candidates Tournament, Anand is first with 7,5 points, still a full point ahead of Aronian. Mamedyarov and Karjakin share the third place with 6 points each. On 5-8th place and with 5,5 points each are Kramnik, Svidler, Topalov and Andreikin. 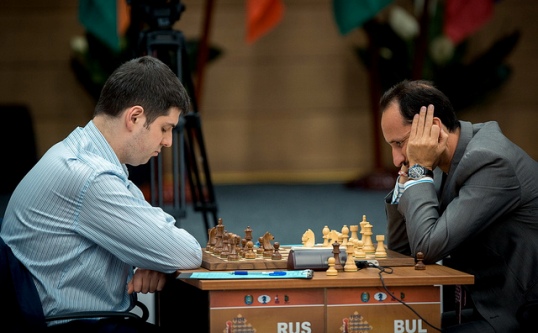 Peter Svidler’s Taimanov Sicilian was not a great surprise for Veselin Topalov, but the recapture on 8th move, dxc6 instead of Qxc6, is a rare continuation.

Topalov continued in the straightforward manner by transferring the knight to c4 and playing a key move, according to Svidler in the post-game press conference, 12.f3 to effectively stop the counterplay.

The rigid pawn structure and gapping hole on d5 were preventing black from activating the pieces. He was reluctant to part with the bishop pair to eliminate the dominant c4-knight.

White eventually broke through the d-file to win the black a5-pawn. Being unable to find a perpetual check, Svidler gave up.

The game between Levon Aronian and Vladimir Kramnik started as a Queen’s Gambit Exchange variation, but white deviated from the theory quite early, by playing the literally unknown 8.h3.

Black immediately used the opportunity to trade the dark-squared bishops and speed up his development.

Both players castled long and tucked their kings into safety. The pieces were shuffled around until white decided to go for a central break with e3-e4.

Aronian admitted that he wouldn’t risk that much if he would be closer to the first place. The players repeated the moves for a draw in 31 moves.

Actually, instead of Ba6 in the end, black had an interesting maneuver in 28…Nb5 29.exd5 Na5! which might have given him something. Aronian was stunned when FIDE Press Officer showed him this line. 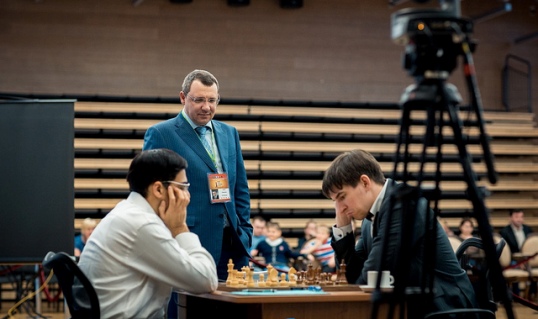 Khanty-Mansiysk mayor V.Filipenko observing the game between Anand and Andreikin

Dmitry Andreikin wanted to try a Caro-Kann against Viswanathan Anand, exactly the line that Carlsen played in game 2 of Chennai WCC match.

Anand definitely had an improvement ready, as he deviated on move 15 with Qd3-f3. In this development he kept more pieces on the board.

Black was trying for a usual queenside counterplay, while white centralised his pieces waiting to answer black’s c6-c5 break with d4-d5.

Black immediately went astray by allowing the pawn to advance further, all the way to d7. In addition, white launched an attack against the enemy king.

However, Andreikin didn’t roll over, and he sacrificed a bishop to lead the white king out in the open field.

His efforts paid off when Anand conceded a draw by “taking a practical decision” to repeat the moves.

Anand commented later – “I looked at Kd2, but there are two rooks, queen, knight jumping around, and I couldn’t see it through.” He added that 36.Bd2 might have been a better try.

Shakhriyar Mamedyarov and Sergey Karjakin played the longest game of the day. Karjakin took note of Mamedyarov’s handling of the sharp f3 Nimzo-Indian in the earlier clash with Aronian.

The Russian team prepared a Benko-like counterblow 5…b5. As it was expected from the tactically gifted Azeri, he quickly expanded to grab space in the center.

Karjakin was pleased with his opening, but at the pres conference he criticized 20…Ndc5, which took the knight far away from the defence of the king.

Black did win three pawns, but he was running low on time and white was constantly endangering the king. At one moment black had only 14 seconds to complete six moves (there is no increment before first time control).

Karjakin beat the zeitnot, but by then white simplified the position and in the next hour held a draw in a double rook endgame despite being one pawn down.