In round 8 of the FIDE Candidates Tournament Levon Aronian stunned the co-leader Viswanathan Anand with an enterprising novelty as early as move 3.

Anand appreciated the strength of Qb3 in various transpositions as it was not easy for him to reach a convenient Catalan or Gruenfeld structure. He finally went for the reversed Benoni even if it included a pawn sacrifice. Black did achieve quick development as compensation.

Aronian said that he convinced himself in the viability of the novel idea, which “he discovered during a nap”. He knew that computers wouldn’t like the pawn grab, but he believed he could “always pull a Petrosian and slowly consolidate”.

As the game progressed Aronian grew unsatisfied with his position and started to fear of another quick loss against Anand. He joked that he wished black had his pawn back on c5, a square which Anand used to transfer the pieces and exert huge pressure on white queenside.

The game was drawn after repetition on move 19. 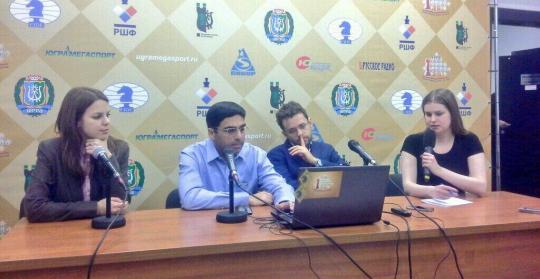