Levon Aronian defeated Sergey Karjakin in round 7 of FIDE World Candidates Tournament to join Viswanathan Anand on the top of the crosstable.

Anand had some advantage with black against Peter Svidler but he couldn’t achieve more than a draw.

After seven rounds Aronian and Anand are leading with 4,5 points each. Kramnik is half a point behind and Svidler remained on 50% score. Topalov, Andreikin and Mamedyarov are on 3 points each, while Karjakin is last with 2,5 points. 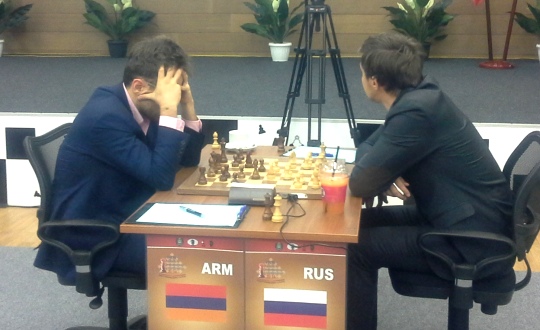 Veselin Topalov was not amazed by Dmitry Andreikin’s opening choice, since the Russian repeated the line he used to beat Kramnik last year in Dortmund.

Already on the 7th move white introduced a novelty, but his plan was kind of slow and black threatened to take the initiative after a quick castle and pawn sacrifice.

But Topalov chose a wrong path and instead of recapturing the c-pawn he went for the kingside expansion. The tactical problem is that 18…g4 wouldn’t work because of the powerful influence of white heavy pieces on the open files.

White first secured the advanced c6-pawn and then evacuated the king to safety on a1. Black was running out of options as his pieces couldn’t get to the good squares.

Another Berlin Ruy Lopez in the game of former World Champion Viswanathan Anand proves that he has plenty of preparation left from the match in Chennai.

Anand employed a novel idea 11…exd4 with d5 and Nh5, which worked exceptionally well in combination with the strike against white center.

Peter Svidler spent 40 minutes to make 15.Bc2 and his position looked depressing, but then suddenly Anand pulled a break and allowed white to somewhat stabilize the game.

Anand started over again by giving the queen for rook, bishop and better pawn structure. But Svidler found the straightforward plan of eliminating all the pawns on the queenside, after which Anand agreed to a draw.

White had difficulties in getting his pawn majority going, while black slowly probed opponent’s structure on the other flank. Despite the apparent simplicity on the board, Karjakin was spending lots of time and his position slowly deteriorated.

Few moves before the time control white conceded two pieces for a rook and some pressure on the back rank. He did win the bishop back, but then black captured a handful of pawns while constantly threatening the white king.

Karjakin tried to seek the escape by exchanging the queens but black pawns were too fast and the game was concluded in Aronian’s favor on move 53.

Shakhriyar Mamedyarov remained loyal to the Ragozin Queen’s Gambit defence despite the earlier loss against Aronian. He attempted to surprise the opponent with unknown 14…b5, but Vladimir Kramnik navigated quickly through the opening, most likely thanks to the home analysis.

White emerged with a small but healthy advantage and Kramnik proceeded to perform his traditional positional squeeze.

At some point Kramnik rushed with the central break e3-e4 and Mamedyarov got the chance to unbalance the position by grabbing a piece and allowing two advanced pawns.

White pawns were looming near promotion but somehow he just couldn’t find the way to queen them.

Nevertheless, the position was immensely complicated and black had to find a sequence of computer-like moves to reach a better rook endgame. Mamedyarov’s hand slipped in the decisive moment when he allowed promotion with check instead of creating checkmating net around white king.