The co-leaders Levon Aronian and Viswanathan Anand shared the point in their round 8 match in the FIDE World Candidates Tournament.

The duo remained in joint lead, but now the possible tie-break at the end of the event would favor Anand (mutual score 1,5-0,5).

Vladimir Kramnik missed a chance to catch the leaders as his opponent Dmitry Andreikin defended very well to deserve half a point.

Shakhriyar Mamedyarov sacrificed a knight for attack but Veselin Topalov found the safe route to make a draw in the rook endgame. Sergey Karjakin defeated Peter Svidler in the longest game of the day.

After eight round of play Anand and Aronian are on top with 5 points each, while Kramnik is close behind with 4,5 points. The remaining five players, Mamedyarov, Topalov, Karjakin, Svidler and Andreikin are on 3,5 points each. 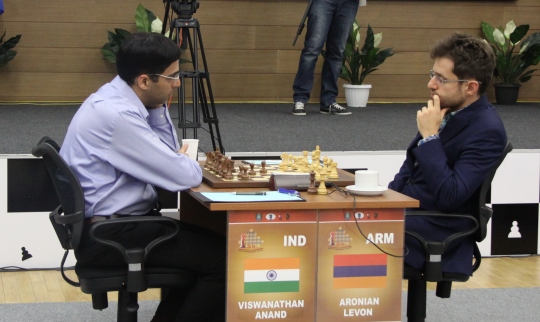 Levon Aronian stunned Viswanathan Anand with an enterprising novelty as early as on move 3.

Anand appreciated the strength of Qb3 in various transpositions as it was not easy for him to reach a convenient Catalan or Gruenfeld structure. He finally went for the reversed Benoni even if it included a pawn sacrifice. Black did achieve quick development as compensation.

Aronian said that he convinced himself in the viability of the novel idea, which “he discovered during a nap”. He knew that computers wouldn’t like the pawn grab, but he believed he could “always pull a Petrosian and slowly consolidate”.

As the game progressed Aronian grew unsatisfied with his position and started to fear of another quick loss against Anand. He joked that he wished black had his pawn back on c5, a square which Anand used to transfer the pieces and exert huge pressure on white queenside.

The game was drawn after repetition on move 19. 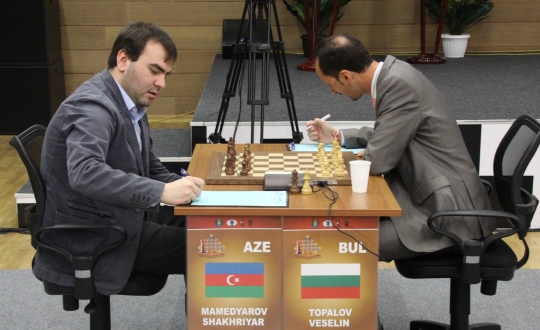 Shakhriyar Mamedyarov defended with the Naidorf Sicilian and Veselin Topalov used the Fischer’s favorite 6.h3 which is back in fashion again.

The play soon transposed into Dragon variation. White castled long and expanded on the kingside but black was quick to generate the counterplay on the other flank.

Mamedyarov said he didn’t like his knight and he didn’t want to stay passive in defence so he decided to sacrifice this piece to open up the b-file.

The temporary sacrifice triggered a forced line that led to an equal rook endgame. Draw signed on move 32. 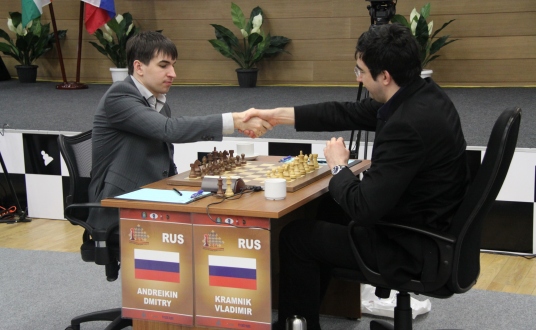 White created some pressure as his bishops cross-fired all over the board, but he probably over-estimated the position resulting after the pawn sacrifice.

Black did experience problems with coordination while white dominated on the c-file and on the 7th rank.

At some point black was even two pawns up but white had strong pressure on the central pawns. After the massive exchanges white got the material back and a drawn endgame was reached. 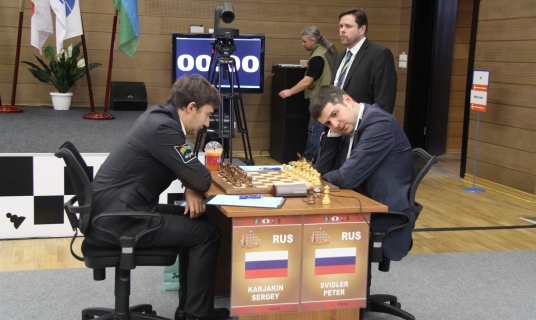 Peter Svidler used a clever-move order to transpose from Reti to King’s Indian Attack, an opening which certainly wasn’t high on the priority list in Sergey Karjakin’s preparation.

Much of the middlegame was black’s effort to exchange some pieces and stabilize the extra pawn.

White attempted to set a fortress, but black broke through with 40…f4+ just before the time control. Faced with tough defence white was slowly losing the ground.

Karjakin converted the advantage in the 7th hour of play. 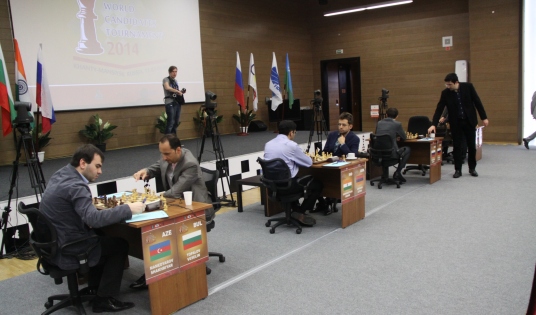