In the battle of two former World Champions Viswanathan Anand defeated Veselin Topalov to single out again on the top after his co-leader Levon Aronian lost to Shakhriyar Mamedyarov.

After nine rounds of play Anand is leading the race with 6 points, a full point ahead of the second placed Aronian.

Kramnik, Karjakin and Mamedyarov are on 4,5 points each. Andreikin and Svidler share the sixth place on 4 points, while Topalov is last with 3,5 points.

Monday is the rest day, the tournament resumes with round 10 on Tuesday. 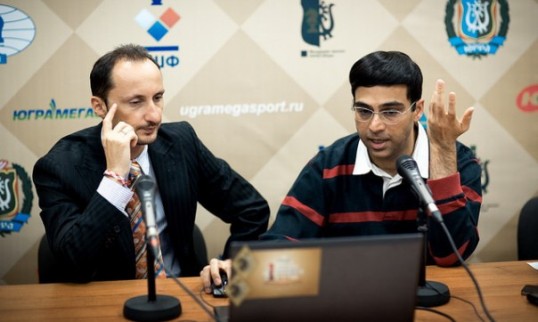 The match between Dmitry Andreikin and Peter Svidler was a Naidorf Sicilian with the Fischer’s variation 6.h3.

Svidler opted for the traditional e5-Be6 setup, while Andreikin expanded on the kingside with g4. Black made a counter in the center and soon the queens went off.

The position quickly simplified but there were still some resources for both sides.

However, after reaching the required 30 moves the players have agreed to a draw.

Black successfully built a strong attack and white was forced to concede an exchange. But then black strayed from the right path and white was given a chance to coordinate the pieces.

A few more mistakes by Aronian and Mamedyarov was already launching a devastating counterattack.

Shortly before the time control white decided to trade down to a winning opposite-colored bishops ending with two extra pawns. Black immediately gave up.

Topalov went for a more flexible structure with e6, much similar to the Scheveningen Sicilian.

White allowed the exchange of his strong dark-squared bishop, but he got a quick long castle in return. Black’s reaction was not the best and he soon ended up in a slightly passive French-like structure with the backward pawn on e6.

Black tried to obtain some counterplay against white f4-pawn, but the exchange of both pairs of rooks only helped white to press on black’s weak points.

In the ensuing Q+B endgame white king was also much safer.

After some clever maneuvering white won the pawn and proceeded to convert the advantage.

Today it was Sergey Karjakin’s turn to use an unexpected move order in the opening to throw Vladimir Kramnik off the balance.

The position after 7.Qb3 strongly resembled some of the Kramnik’s own games with white from the 90’s. Exactly at this moment black erred by capturing the pawn on c4 instead of taking the knight on f3.

Karjakin grabbed the b7-pawn and after a sequence of natural moves obtained clear advantage.

In desperation, black sacrificed another pawn in the hope of setting a blockade on the light-squares. But after some patient build-up, white was able to push the opponent’s pieces back.