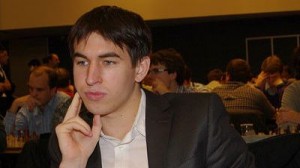 The 48th edition of the Tournament Capablanca in Memoriam 2013 will take place from April 20th to May 1st at Habana Riviera Hotel in La Havana, Cuba.

Chief Arbiter Jose Luis Ramirez informed that two of the main Cuban representatives will not participate in the event. GM Lazaro Bruzon and the new Cuban champion GM Isan Ortiz will represent their country in the Zonal championship that will be played simultaneously in San Jose, Costa Rica.

Thus, the Elite group’s full lineup was announced. With the March 1st ratings, the tournament reaches FIDE Category 18, something that might change in April. There will be two Russian Grandmasters in the field: current National champion Dmitry Andreikin (2727) and Ernesto Inarkiev (2688). Indian Pentala Harikrishna (2705) and Hungarian Zoltan Almasi (2689) will also take part. The field is completed with two Cuban representatives: the best player in Latin America Leinier Dominguez (2723) and Yuniesky Quesada (2596).

More information in the Spanish version of Chessdom.