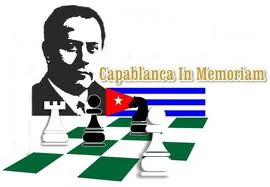 The 48th edition of the Tournament Capablanca in Memoriam 2013 will take place from April 20th to May 1st at Habana Riviera Hotel in La Havana, Cuba.

The event is organized by the Cuban Chess Federation and the Instituto Nacional de Deportes Educación Física y Recreación (INDER).

This chess festival will be played in three groups:

The Elite Group will once again be a six-player double round robin. The line-up will be announced soon. Last year winner was Vassily Ivanchuk.

The Premier Group will be a 10-player round robin with other top Cuban players and at least four foreign Grandmasters.

The Open A Group will be played over 10 rounds of Swiss system with about 100 participants. This group will have strong presence of foreign players and will allow the possibility of obtaining FIDE title norms.

The Open A will accept the players with international titles and those rated above 2200 FIDE. All other players will be seeded into Open B, which will also take the format of 10-rounds Swiss.