The press conference was attended by dozens of media representatives and guests.

Kirsan Ilyumzhinov welcomed the players and the guests on behalf of the FIDE Presidential Board. Mr. Ilyumzhinov also thanked the former World Champions that are attending this event. He is hoping that the match will be interesting and wished good luck to everyone.

Andrey Filatov said – “Welcome to Sochi, welcome to Russia. Thank you all for coming, we will do our best to make you feel good here.” 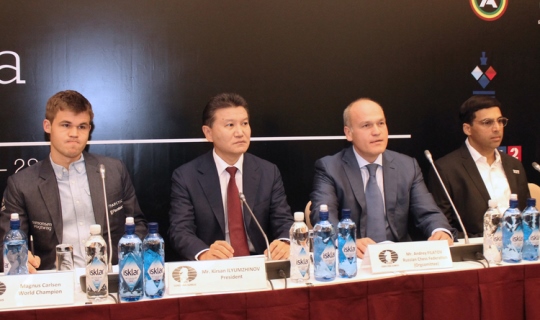 Magnus Carlsen started with – “Thanks for having me here in Russia”. – He added that he is looking forward to the start of the match and thanked the media present in Sochi.

Viswanathan Anand started by thanking everyone who made the event happening in Sochi. He enjoyed the week he spent here before the match and is also looking forward to the start of the games.

Anatoly Karpov pointed out that this is the match between the two strongest chess players and the games will be very interesting. Mr.Karpov is happy that the event is taking place in Sochi, after the Winter Olympics which were a great success. He wished luck to Carlsen and Anand.

Ilya Merenzon extended his greetings to everyone attending the press conference and further to everyone following the World Championship Match online. The interest in the event is huge and the organizers are expecting a record-breaking internet audience.

The journalists were very active in posing questions and the press conference exceeded the planned schedule by lasting more than 45 minutes.

Anand revealed that his seconds are Krishnan Sasikiran, Radoslaw Wojtaszek and Grzegorz Gajewski.

Carlsen introduced his seconds as – “There’s the Dane, there’s the Hammer, and that’s all”. (Peter Heine Nielsen and Jon Ludvig Hammer)

On the question about organization and facilities, Mr. Ilyumzhinov took the opportunity to thank the government of Krasnodar region and the Governor Mr. Tkachev for their kind consent to host the World Championship. He added that FIDE had inspected the venue on two occasions, and the player’s representatives also had their inspections, and everyone was satisfied with the conditions offered in Sochi, both from organizational and technical point of view.

FIDE Prrsident also said that the organization of the match in Sochi will bring FIDE closer to fully joining the Olympic Games family. He reminded that the two persons in attendance, Karpov and Anand, had played their own World Championship match in the heart of the Olympic movement in Lausanne, Switzerland.

Mr. Karpov presented the two unique chess sets that he designed and are his gifts to Carlsen and Anand. One set is made of mammoth tusks, the material that can be found only in Russia. The second set is named “invincible” and is made of special precious wood. – “It is the first time that a world champion awards world champions.”, Karpov concluded.

Mr. Filatov said that chess is a great promotional tool, and two years ago this tool was used to promote the Russian Art with the match between Anand and Gelfand. Now chess is being used to promote Sochi. The action “Chess in Museums” will continue with the Russian Superfinal in Kazan Kremlin.

Mr. Anand said that he enjoys playing in Russia very much, and that he is happy to be here, – “Best country to play chess” – he concluded.

Mr.Carlsen reminded of his shaky start in the match in Chennai when he “could have been severely punished”. He added – “Obviously, it’s important for me to get off with a more confident start”.

Near the end of the press conference, Karpov was asked which recommendations, based on his vast experience, he could give to the players in the match.

Mr.Karpov answered: “The rematch right was canceled long time ago, and although this match looks like a rematch, I must praise Vishy Anand for making a fantastic comeback by winning the Candidates Tournament.”

“I agree with Magnus that it is extremely important how are you prepared and how are you playing in each individual game” I and all spectators wish that both players are in great shape.”