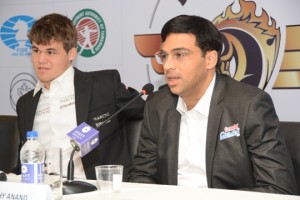 The Bilbao Chess Grand Slam Masters Final 2016 will take place between the 20th and 30th July, its organizing committee has announced today. And they have announced a strong lineup including both Magnus Carlsen and Viswanathan Anand (stay tuned for full participants list later today on Chessdom.com)

The ninth edition of Masters Final has been brought forward from its usual date in the calendar of the most important international chess events, making way for November’s clash in the individual World Championship between the current champion, Magnus Carlsen, and the winner of the Candidates Tournament which will begin on the 11th March in Moscow. Thus, the Bilbao Final Masters 2016 will take place from 20 to 30 July.

Update: dates are changed to 13-23 July, the filed has been updated too, see the full info here

As well as the earlier staging of the event, the Bilbao Masters Final 2016 also has other changes, such as the return to its traditional format of six competitors.

The organizers of what is now one of the most prestigious tournaments in the chess calendar are currently finalizing the participation of six of the top ten world grand masters. In fact both Carlsen from Norway and Viswanathan Anand from India – current world champion and runner up respectively – have committed themselves to participating. Update 1: Along with them, Hikaru Nakamura from the United States has also confirmed his presence in this prestigious tournament in Bilbao.

The American of Philippine origin, Wesley So, is the current holder of the title, achieving the honour at the 2015 edition after a dramatic tiebreak against the Dutchman Anish Giri.

The organization of the Masters Final is also working on the design of an open international tournament to take place at the same time at the end of July. They are expecting the presence of grand masters and international masters from numerous countries, given both the amount of prize money to be played for and the attraction of Bilbao as one of main capitals of world chess.