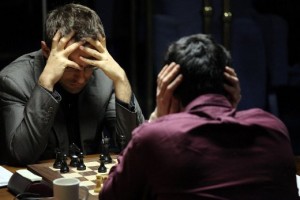 Three out of the four games of the fifth round already finished in the fifth round of the Candidates Tournament. Magnus Carlsen and Levon Aronian were able to save draws in inferior positions to maintain the lead.

Vassily Ivanchuk was able to recover psychologically from the two games that he lost on time and proved to be a difficult opposition for the World’s Nr. 1. The Gruenfeld used by Carlsen was responded effectively by the Ukrainian, who even obtained a pawn advantage in the early middlegame. The position was simplified and white started to look for ways to convert his kingside pawn majority. However, Carlsen used his a-pawn as an effective resource to create counterplay and the players signed the draw after 57 moves.

Vladimir Kramnik used his trademark style to outplay the co-leader Levon Aronian in a strategic position. Unfortunately for the Russian, the big decisions came during time trouble. The computer gives winning continuations close to move 40 that were wrongly evaluated by the ex-world champion. Anyway, he obtained an opposite-colored bishops endgame with two extra pawns, except that these pawns are in the wrong side of the board – the h8 square did not match the color of his bishop. The Russian gave up his winning attempts on move 72.