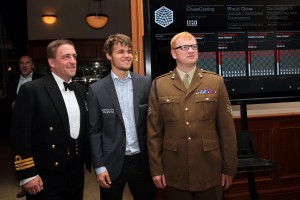 Carlsen during the opening ceremony

The so awaited Candidates Tournament 2013 has kicked off. Eight of the best players are in London to show their best game in order to gain the right to challenge World Champion Viswanathan Anand in a direct match. The opening ceremony took place yesterday and the players started battling today at 14:00 local time.

The most expected game of the first round was the fight between the two best rated players in the live lists. The heavy favorite Magnus Carlsen faced the Armenian talent Levon Aronian in a crucial struggle to get ahead right at the beginning. However, the players decided to play it safely, as GM Christian Bauer noted in the live commentary. The draw was signed on move 31 in a perfectly symmetrical position.

The rest of the games have barely crossed the 15-moves barrier. The Russian duel between Kramnik and Svidler started with a surprising Queen’s Gambit put up by the ex-World Champion; this led to a quick exchange of queens, but despite this fact, there is still a lot of play left. Radjabov is using a strange setup with Black against Gelfand, while Ivanchuk and Grischuk are fighting in a Catalan.