The Candidates Tournament 2013 in London continued Sunday with round 13 matches. Kramnik and Gelfand played a “human” game of chess, with lots of maneuvering and probing.

Kramnik gradually increased the pressure and obtained advantage, but in an erratic time trouble he weakened the king with 37.f3 and could not find anything better than to split the point.

Magnus Carlsen defeated Teimour Radjabov in a game that was simply amazing, a truly breathtaking moment of the Candidates! The match started with a 4.Qc2 Nimzo Indian, but the Norwegian quickly began looking for unconventional play, in order to have chances for a full point with black. 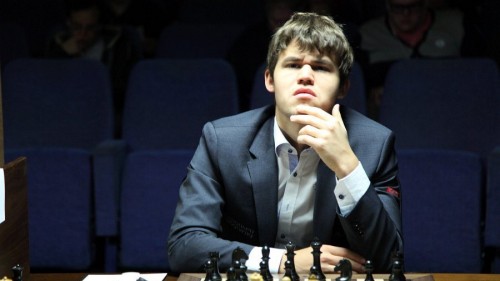 Radjabov chose the safe moves and managed to find precision in time trouble, stirring the game to an equal game. Carlsen kept on looking for chances, in a position where in any other tournament and any other situation we would have certainly seen a “Grandmaster draw”.

His effort started paying off on move 64, when with a4 White created a permanent weakness that became a target for the rest of the play. In time trouble Radjabov kept on defending wisely for many moves, but Calsen’s diligent efforts were waring off his opponents clock and mental strength, until finally Radjabov committed the fatal mistake 80.Nc4.

Heading into the final round Kramnik and Carlsen are on 8,5/13 points each, leaving the nearest followers point and a half behind. 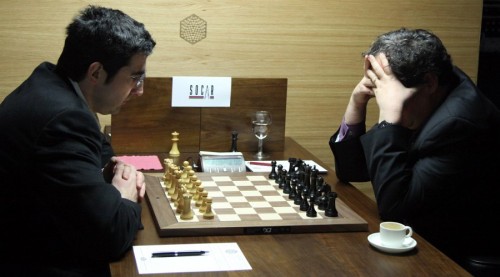 It is important to note that in the case of equal scores in the last game, Carlsen would be declared winner and world championship challenger thanks to the better tie-break – a greater number of wins.

In the last round Carlsen is white against Peter Svidler, while Kramnik is black against Vassily Ivanchuk.

Exactly Svidler beat Ivanchuk today, after the Ukrainian flagged once again, albeit in an already lost position.

Alexander Grischuk and Levon Aronian played a mix of the Slav and Gruenfeld defence, but the game was balanced throughout. All the queenside pawns were taken off the board and the game ended in a draw by repetition shortly before the time control. 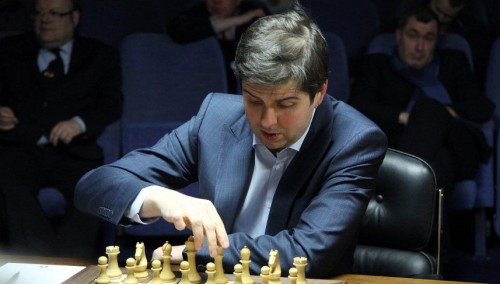