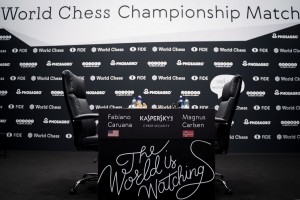 Hello everyone and welcome to the live coverage of the 2018 World Chess Championship match between the reigning champion Magnus Carlsen (Norway) and the challenger Fabiano Caruana (USA). In this live blog + live games from WCC 2018 we will be covering the event Carlsen – Caruana with the latest news, developments, interviews, and in-game details.

The most important feature here will be the lines of analysis by Lc0 – the open Neural Network, and the TCEC champion Stockfish running on a Super Computer of 128 cores.

Officially the game ends in a draw. A successful feat for Caruana with black, where he could have had chances for more than 1/2 points with another inaccuracy by Carlsen at some point. The official comment of Carlsen after the game, “I am not happy about this game, but it is better than losing”

The indication by the engines is clear. It is still more difficult to play this game with white, but objectively this is a draw

After deep think Carlsen goes for the second line of Lc0 mentioned below. Caruana comes with immediate reply as per the given line.

After nine moves in a very typical continuation and long theory ahead, even though computers are showing some advantage for white, statistics show that this is not at all a bad opening for black from historical plan.

1. d4 by Carlsen today followed by …Nf6 2. Nf3 d5 3. c4 e6 4. Nc3 Be7 Another interesting energetic try could have been …c5 here, but there is a lot of theory ahead and we are yet to see what the players have prepared.

Carlsen and Caruana are at the board. Carlsen is in light colored suit, Caruana in a dark one. The battle of colors and minds is about to start

1h and 15 minutes to the start of the game. The engines are set and running, it is time for a show.

The Sicilian Rossolimo was on the board yesterday. That will certainly be seen in later games where Caruana is white again, often World Chess Championships turn in theoretical battles. Today’s opening choice will set yet another trend. Who will be better prepared, we will know in just 1h and 45 minutes.

Two hours are left to the start of the game. Yesterday’s drama in the first half of the Caruana – Carlsen game 1 has left many questions to be answered today. Stockfish, running on a Super Computer of 128 cores, often reached evals of over +7.5 for Carlsen before move 40 and with the time running this eval was increasing even more. Clearly, that would have been a victory in any other circumstance, but the psychological pressure of a first game in a World Chess Championship took its toll and Magnus could not close the game.

Can Carlsen utilize effectively the white’s advantage today or will Caruana stabilize his play? In a match of only 12 games every single one is of high importance.

What do experts think, check out our day 1 live blog