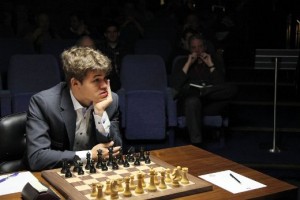 Rating favorite Magnus Carlsen has defeated Russian Peter Svidler in the sixth round of the Candidates Tournament 2013. This win puts him on +3 and secures him, at least, the shared lead after this round. Levon Aronian is still playing, and will try to obtain a win to reach Magnus’ score.

Magnus Carlsen was able to convert his positional advantage against the World Cup winner in 36 moves. Svidler, who should have tried to go into a worse endgame where he still had theoretical chances to get a draw, chose to activate his pieces with very little time on the clock. He tried to use some traps to confuse his opponent, but Carlsen reacted calmly and correctly. This led to Svidler’s bishop getting trapped on the center of the board. This victory with black is certainly a huge step for Carlsen, who confirms his status as favorite in this event.

Meanwhile, Teimour Radjabov has managed to come out of time trouble alive. His position seems slightly unpleasant but totally playable. On the other hand, Vassily Ivanchuk has just over 1 minute to make his next 11 moves. Vladimir Kramnik chose a speculative continuation instead of going for a repetition in order to see if Ivanchuk can survive his trouble with the clock.