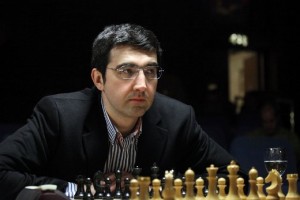 The Candidates Tournament is already getting closed to the decisive rounds and the tension is rising among the players. Vladimir Kramnik managed to put pressure on Magnus Carlsen’s position but could not convert it into a full point.

The main game of the day was the first one to finish, but it also got the attention of the people following the live transmission. Kramnik used his typical style in one of his favorites openings – the Catalan. He managed to gain a pawn on the queenside, but Carlsen’s endgame technique once again allowed him to save a half point. The Norwegian used the drawish tendencies of the opposite-colored bishops endgames masterfully. The ex-world champion gave up his attempts to win on move 41.

The other game that already finished is the Russian match-up between Peter Svidler and Alexander Grischuk. The Sameisch variation of the King’s Indian Defense was seen on this board. Probably, most of the game followed their home preparation as the players moved really quickly in a completely sharp position. On move 17, Svidler even sacrificed his queen and did not take too long to demonstrate that there was enough compensation. The players signed the draw right after the time control.