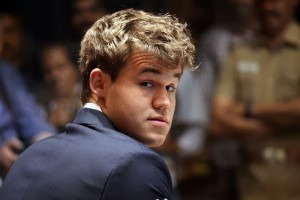 Magnus Carlsen achieved victory in round 3 of Shamkir 2015 to stay top of the table. He defeated Fabiano Caruana with the black pieces. In a game that was previewed as extremely difficult for Carlsen (see preview part 1 and preview part 2), the World Champion secured an equal position, and when given the chance in the endgame he went for the full point.

With this defeat Fabiano Caruana leaves the 2800 club, leaving Carlsen the only player with 2800+ ELO. Carlsen with 2869 is 70 ELO points ahead of Nakamura, who is at 2799 at second position in the live ratings.

The only other winner of the day was Wesley So, who is now sharing the lead with Carlsen. After a difficult US championship, where Wesley So was handed a debatable forfeit, he managed to bounce back in round 1. As the rounds are progressing, it is obvious So is feeling much better away from problems and is ready to attack the Shamkir 2015 title.

In other results of the day Anand – Giri, Mamedov – Kramnik, and Mamedyarov – Vacier-Lagrave all finished draw.