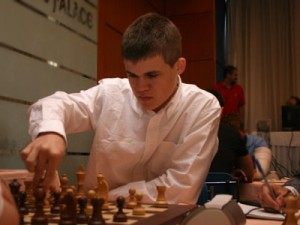 Magnus Carlsen back in the race for the World Championship

Magnus Carlsen has decided to participate in the next World Championship cycle. He is stopping the boycott that began in May 2010 and is back in the hunt for the highest title in chess.

The Norwegian prodigy announced his decision right after winning Bilbao Grand Slam in an interview for the Norwegian VG. Carlsen admits to have come to the decision after FIDE announced that the next Candidates Tournament will be a round robin event.

Magnus Carlsen shared, “If the changes that are predicted come true, I am ready to fight for the World Championship title.”

Besides the change to tournament format, Carlsen will also have as a requirement a “waterproof contract”.

FIDE has published the official Rules & regulations for the Candidates Tournament of the FIDE World Championship cycle 2011-2013. According to the regulations the 3 top players from the World Cup 2011 qualify (Svidler, Grischuk, and Ivanchuk), the player who loses the World Chess Championship 2012, three players on rating from the average FIDE Rating List of July 2011 & January 2012, and one nominated player by the organizer.

The total prize fund of the event is 420 000 eur and the format is double round robin. The time control is 120 minutes for the first 40 moves, 60 minutes for the next 20 moves and then 15 minutes for the rest of the game plus an additional 30 seconds per move starting from move 61.

A kind of a Sofia rule will be implemented. The players cannot draw a game by agreement. A claim for a draw is permitted only through the Chief Arbiter (or his Deputy) in the cases of perpetual check, stalemate, threefold repetition, the 50-move rule or insufficient material. Other kinds of theoretical drawn positions are allowed to be claimed by one or both players through the Chief Arbiter (or his Deputy). The Chief Arbiter can then declare it, or not, as a drawn game after consulting his/her Technical Advisor.