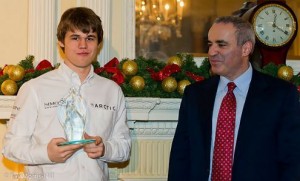 Magnus Carlsen is just a step away from dethroning Kasparov as the highest rated player ever in chess history. After today’s victory against Bologan, the young Norwegian has live rating of 2847 ELO, just four points away from Kasparov’s peak 2851 ELO.

Kasparov’s rating peaked in July 1999 and January 2000 when he was 35-36 years old, now Carlsen has the chance to surpass the mark being only 21 years old.

This is not the only achievement of Kasparov that Carlsen is going to surpass. In January 1984, Kasparov became the No. 1 ranked player in the world, with a FIDE rating of 2710, the youngest ever world No. 1, a record that lasted 12 years. The record is currently held by Magnus Carlsen.