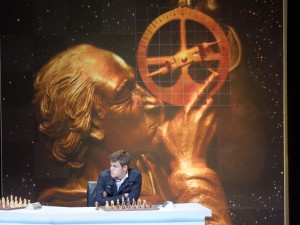 Carlsen in Mexico getting ready for the game against The World

The 21 years old Norwegian prodigy Magnus Carlsen was the star of yesterday’s activities of the largest Mexican chess festival Gran Fiesta UNAM 2012. Carlsen played two simultaneous games against thousand of spectators. The first game was against close to 2000 spectators at the Nezahualcoyótl hall, while the second was against the World via the Internet. (replay the game here)

It all started early in the morning, when Mexican chess fans started gathering in the campus of UNAM to challenge the number one in the world’s ranking. Close to 2000 fans, with predominant age 16-25 years old, participated in the live vote chess game via the local hall electronic system. A group of Grandmasters was proposing moves to the audience, while the fans voted for their choice via the electronic device provided in each of the seats in the cozy room. The most voted move was executed on the board by the Cuban WGM Sulennis Piña Vega.

The game continued over 90 minutes. Carlsen took the initiative at the very start of the game and maintained the pressure right from the opening. An early piece blunder accelerated the expected score in the game, and the Norwegian Grandmaster could concentrate on the other game vs the World.

Carlsen vs The World

Carlsen’s game against the World was very different as quality and choice of the audience. The internet users clearly had better chess understanding and in many cases programs at their disposal, thus perfectly choosing from the options provided by the Grandmasters. The first shaky move by The World came at 20…h6, but Carlsen immediately returned the favor opting for 21. Be3. It was at move 30 when the World was failed by something unexpected, they were given three choices to vote from and none of them were the best possible move. Surprised by the possibilities ahead, the World chose the worst of all suggested moves 30. Re8, stirring the game into pleasant territory for Magus Carlsen. After a few more imprecisions, the Norwegian prodigy concluded the game, finishing the day 2,0/2.

However, that was not the end of Carlsen’s simul display, the interest towards the young star was so big that he had to stay for a full hour signing books, boards, leaflets, magazines, and anything that the fans brought with them. 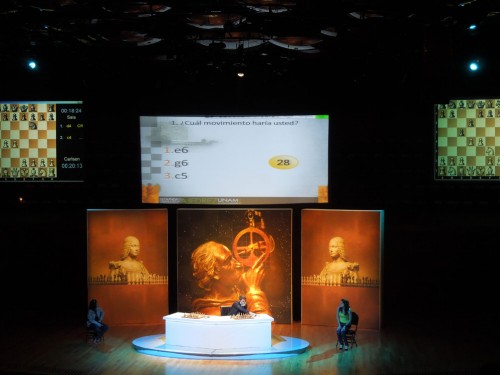 Carlsen in action, the first game is already finished and the Norwegian is concentrated on the game against The World

After the whole show Carlsen kindly answered a few questions by the Chessdom.com correspondent in Mexico and many years journalist at La Nacion, Carlos Ilardo. Carlsen stated in the interview, “Chess has been rewarding to me. It is a game that I find interesting from the very beginning. It also helped that I started winning easily, but the game itself has been the driving force for my desire to play.” Noting his nice experience in Mexico and the large interest with which he was received, Carlsen added, “I like traveling and popularizing chess around the world, and I will continue doing it.” And regarding the World Chess Championship cycle and his possibility to get involved in chess politics, Carlsen noted, “I believe the world cycle is not the best at the moment, but even though I have had my differences with FIDE, I am only interested into playing chess.” 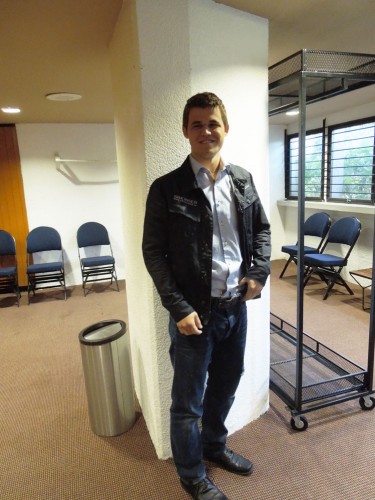 Carlsen after the talk with Chessdom.com correspondent Carlos Ilardo

Carlsen to play with Polgar in Torneo Cuadrangular

Right after the game of Carlsen vs The World, attention at Gran Fiesta UNAM turned to another playing hall, where Judit Polgar met the local hero Manuel Leon Hoyos in the semi final of Torneo Cuadrangular. Polgar won her rapid game after a blunder by Leon Hoyos, and later on found enough resources in inferior position to draw with the Mexican and win the match 1,5-0,5. This way tonight the highest rated woman in the world will meet the number one in the world ranking in the final of Torneo Cuadrangualar. The games start at 17:30 local time and can be followed live here. 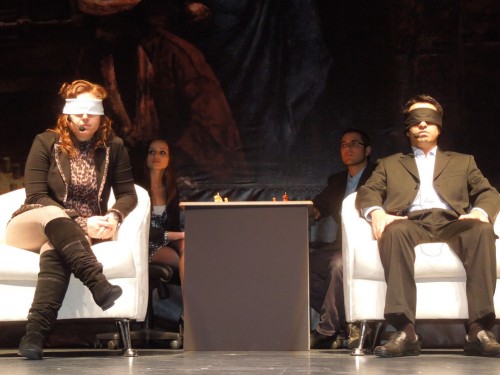 Polgar and Leon Hoyos in action during Torneo Cuadrangular

Here is some of the chess fever that is present in Mexico during the visit of Carlsen to Gran Fiesta UNAM.