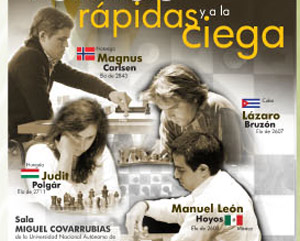 Carlsen is very active on the chess stage this season. Being just a few ELO points from Kasparov’s record, the young Norwegian seems to be more interested in the games of chess and the challenges it presents, than chasing historical landmarks.

This weekend Carlsen will participate in two important events, both part of the largest chess festival in Mexico Gran Fiesta UNAM 2012.

The first event will be the Torneo Cuadrangular where Carlsen will meet Lazaro Bruzon, Judit Polgar, and Manuel Leon Hoyos. The tournament is a knockout event composed of mini matches. On Friday at 17:30 local time (00:30 CET, 18:30 EST) the World number 1 will meet Lazaro Bruzon in the first semi final. Polgar and Leon Hoyos play at the same time on Saturday. The 3rd-4th place mini final is Sunday at 11:00 local time, while the Grand Final of Torneo Cuadrangular starts at 17:00 the same day. The official live games transmission of the tournament will be provided on Chessdom.com with computer analysis. 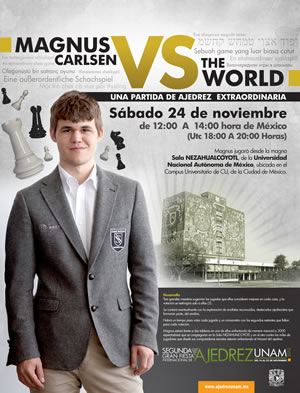 Carlsen vs The World poster on the Gran Fiesta UNAM 2012

The second event of Carlsen takes place the day of the mini match Polgar – Leon Hoyos. At 12:00 local time Carlsen will play against The World in simultaneous games. The tournament will be a variant of vote chess. Three GMs will be suggesting what they consider to be the best moves in the game, while the audience will choose between them in a given time frame. Magnus will play on two boards, one of them against 2000 players in the Sala Magna Nezahualcoyotl, while on the other against thousands of internet spectators. Again official live games transmission of the tournament will be provided on Chessdom.com with computer analysis.

To complete his visit in Mexico, Carlsen will give an open press conference at 12:00 the day after the Carlsen vs The World games. 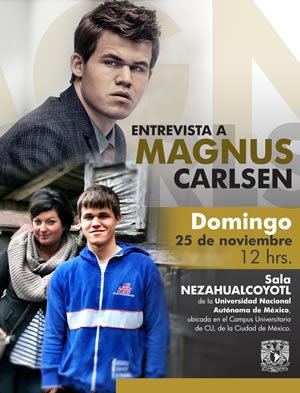