After a disastrous first day, Magnus Carlsen showed great tenacity and resilience as he annihilated the rest of the competition to win the rapid portion of the Leuven leg of the Grand Chess Tour. The world champion described his embarrassing blunder against Nakamura as a “complete breakdown” but was able to shake it off and start the day afresh. The tournament leader Viswanathan Anand wasn’t able to keep the momentum going and lost two games in a row, one of them to Carlsen. The surprise of the day was Wesley So’s second place finish. So had a solid yet quiet tournament, but managed to jump ahead with couple of well-timed wins. 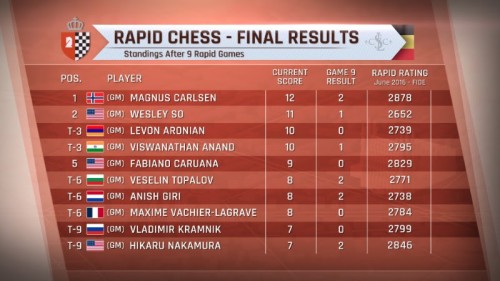 The tournament leader, Vishy Anand, started the day of well by playing another impressive game against Anish Giri and finishing the game off with a simple yet effective tactic. Magnus Carlsen came back from yesterday’s disaster by beating Veselin Topalov in a true Carlsen-esque fashion. It was as if all the blunders hadn’t happened and he was playing like his true self again. American Grandmasters Wesley So and Hikaru Nakamura had an easy draw as did Aronian and Kramnik. Fabiano Caruana suffered against Maxime Vachier-Lagrave but eventually drew.

This was a very bloody round with only one draw between Maxime Vachier-Lagrave and Nakamura. In reality, the aforementioned game was very double edged right from the beginning and should have been won by the Frenchman, who, unfortunately, committed too many errors and let the win slip away. Carlsen’s day kept improving as he beat Anish Giri in less than 25 moves. Giri resigned prematurely, but Carlsen explained that his opponent’s position was so bad that he probably didn’t even want to look at it. Anand suffered his first loss in the tournament against another former world champion and his good friend, Vladimir Kramnik, in what seemed to be a drawn endgame. The commentators assumed the game would end in a draw only to come back to it later and realize that Kramnik had managed to complicate the matters and put Anand under a lot of pressure. This was the last game going, so half of the players were fascinated by the unfolding rook endgame while the other half were watching Belgium’s soccer team play Ireland. Kramnik lived up to his reputation as one of the best endgame players and won the game with precise play. Wesley So crushed through Veselin Topalov’s position as the latter became too greedy grabbing pawns but forgetting to develop his pieces. This victory put him in the lead along with Anand. By defeating Caruana, Levon Aronian was tied for 3rd place with Carlsen, only a point behind the leaders. 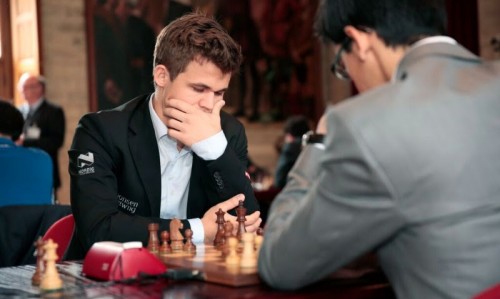 This was the most dramatic round as everything in the leaderboards changed. The big matchup of the round was Carlsen-Anand, a battle that has historically gone poorly for Anand in two world championship matches. This game was no exception as the world champion defeated his rival as he managed to turn a small advantage into a full point. Wesley So and Anish Giri played a long theoretical line leading to a forced draw, which allowed the American to be tied for first with Carlsen. Nakamura played an uninspiring game against Levon Aronian and handed the game to him, allowing the Armenian catch the two leaders. Caruana played a great game against Kramnik and got the full point by setting up a pretty mating net. Vachier-Lagrave and Topalov drew after a long battle.

The last round started with Carlsen, So and Aronian tied for first, and with Caruana and Anand only a point behind. The three leaders all had to play black, which meant that any of the five players could win the rapid. Wesley So made a practical decision and drew Anand quickly, letting the pressure be on the others to either catch or leapfrog him. Aronian, who was finally happy with his result, stumbled in the final round and lost to Topalov, who had been playing much better in Leuven than he did in Paris. Once again, Magnus Carlsen proved why he’s the undisputed #1 player in the world by defeating Kramnik and taking the first place in the rapid portion. In the postgame interview, Carlsen humbly admitted that after yesterday’s fiasco, this win was “too good to be true.” Everyone would agree that any player who can win four games in a row in such a field is a deserving winner. Besides this impressive result, the real nail-biter of the round was the game between Nakamura and Caruana. The US champion sacrificed two rooks for two minor pieces but had two pawns and a lot of compensation. At some point, he lost the thread of the position and made several mistakes allowing Nakamura to exchange queens and go into a favorable endgame. After his game, Carlsen joined the commentary team and even offered his insights. In a heavy time pressure, Caruana made too many mistakes and had to resign. Giri-Vachier-Lagrave was the second to last game to finish, where another great endgame technique was showcased by the Dutchman.

Databases released by Grandmasters: Play against the Slav – by GM Kuljasevic / New: GM Kiril Georgiev full repertoire on the Berlin / King’s Indian and Catalan – by GM Delchev/ Repertoire against 1.d4 – by GM Chatalbashev/ Play against the Gruenfeld – by GM Arnaudov

The rapid portion of the Leuven leg of the Grand Chess Tour is now over and the players are getting ready to play 18 games of blitz. The quality of the games seemed to have gone up compared to yesterday, so the chess fans can expect higher quality games but not without the drama that the shorter time controls bring. After making such a great comeback, the pressure is on the world champion to continue his winning streak. Another player who will definitely want to prove himself is Nakamura, who after winning the Paris leg, has not managed to find his form and is struggling to stay afloat. The next two days promise to be full of excitement and good chess!

All the information is available on www.grandchesstour.org. Live commentary by Grandmasters Yasser Seirawan, Eric Hansen, and Woman Grandmaster Jennifer Shahade streaming from the Chess Club and Scholastic Center of Saint Louis with Grandmasters Maurice Ashley and Alejandro Ramirez reporting directly from Leuven begins at 7 A.M. Central Time and can be viewed on www.dailymotion.com/GrandChessTourOfficial