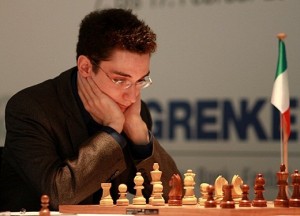 The 8th round of the Grenke Chess Classic saw the leader Fabiano Caruana increasing his lead after defeating one of his strongest rivals, Arkadij Naiditsch.

In the longest game of the round, Naiditsch chose the Exchange Variation of the Ruy Lopez defense. The Italian obtained a bishop pair, but also got a damaged queenside pawn structure. After the opening, it was clear that the German was better prepared in this line and besides Fabiano Caruana had an important disadvantage on the clock.

The game became very sharp on move 21 when the German, once again, advanced his g-pawn. This decision was completely coherent with the kind of play that Naiditsch has shown in this tournament, going for complications instead of taking the safe route. At this point, Caruana had less than 12 minutes to complete his last 15 moves.

Naiditsch could have gotten an advantage with a very accurate – almost computer-like – play around move 24. However, Fabiano proved to be up to the task and made a series of precise moves with very little time on the clock. When the players reached the time control, it was clear that Caruana had a winning advantage and the Italian is well known for his ability to convert such positions. Naiditsch resigned on move 49. 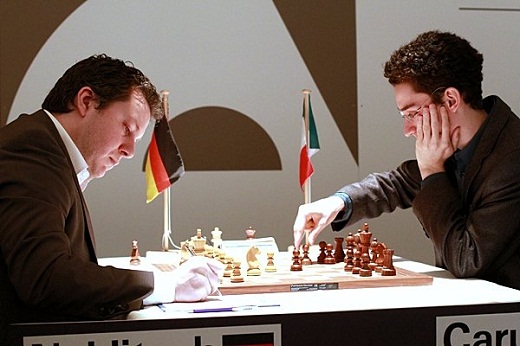 The World Champion Viswanathan Anand is played against the only winner of the previous round, GM Georg Meier. The Indian chose a French Defense where White castles queenside. He looked for ways to create an unbalanced struggle and managed to get a slightly complicated opposite-colored bishops endgame. Both players were able to promote their pawns but this was not enough to tip the scale in anyone’s favor.

After this draw, Anand stays in sole second place a whole point behind Caruana with 2 rounds to go in the tournament.

The third game of the round was the clash between Michael Adams, who is having a rather solid tournament, against GM Daniel Fridman, who comes from losing two games in a row. They played a Nimzo-Indian with a lot of exchanges early in the game. The endgame that arose looked quite drawish right away, especially taking into account the fact that both players are known for having good technical skills.

The game was the first one to end. They signed the peace treaty on move 37.