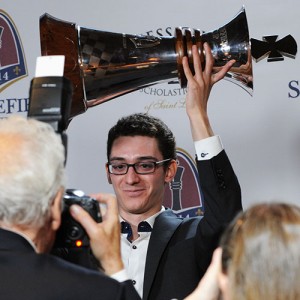 Fabiano Caruana is the winner of the New In Chess Yearbook Novelty of the Year Award 2014 for his dazzling move 14.Rc1! in the Poisoned Pawn Variation of the Advance Caro-Kann. The Italian World #2 beat Maxime Vachier-Lagrave in St. Louis, as part of his amazing seven-games winning streak. His novelty got 32% of the vote.

The 2014 award was the sixth edition of the contest, organized by The Chess Player’s Guide to Opening News. Earlier winners were Vishy Anand (twice), Vladimir Kramnik, Levon Aronian and Daniel Stellwagen. Among the voters, all readers of the Yearbook, were grandmasters Anna Muzychuk, Alex Fier and Ruslan Ponomariov.
Second in the contest was Vladimir Kramniks 9.a3 against Sergey Karjakin in the Queens Gambit Accepted. Third came Rustam Kasimdzhanov with his move 16.Ne5! against Kramnik in the Queen’s Gambit Declined. Radoslaw Wojtaszek came fourth with his 10…Nb4 against Viktor Laznicka; Matthew Sadler was right on his tail with his move 13…b6 against David Smerdon in the Advance French. Maxime Vachier-Lagrave’s 11.Re2 against Anish Giri in the Berlin Ruy Lopez was perhaps a tad too bizarre or too subtle for our audience. It came 6th and last, even though the move has already found followers on the highest level.

The Yearbook is published four times a year by New In Chess. It contains the latest news in chess openings. Each issue brings you dozens of new ideas on the cutting edge of modern chess theory. 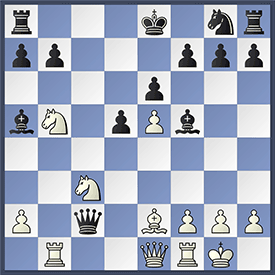