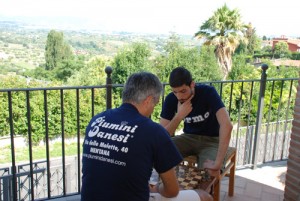 A chess game during the lunch break at Piumini Danesi

Piumini Danesi is an Italian company for duvets, pillows, and bed comfort, that has the sport of chess as one of their primary research methods. As an Italian company, they had many exciting late night chess experiences with the recent success of Fabiano Caruana at the Sinquefield Cup. Can chesscollect primary interest in a football country like Italy? Interview with Daniele from Piumini Danesi

Fabiano Caruana, the new star of the Italian chess, amazed the world with a 7,0/7 start and convincing victory at the strongest ever chess tournament Sinquefield Cup. How did you live the emotion in Italy?

Caruana’s achievement of 8,5 / 10 in the strongest tournament in history is a dream come true. At 7.0 / 7 the emotion was very strong all around Piumini Danesi, following the passion of all Italy. Over 6 million Italians, who did not follow the tournaments regularly before, are now absolutely addicted to the game. Major national newspapers such as “Il sole 24 ore” and “La Gazzetta dello Sport,” are now fueling the interest and even after the end of the event the audience keeps on growing.

Could you feel the excitement of the event with the wins of Caruana accumulating?

As already mentioned, also thanks to the interest of the press and national TV, the excitement and support for Fabiano are increasing every day and with every victory. For many years an Italian chess players did not get much support and so much affection from the general public. Now the excitement is all around and everyone expects the next events of Caruana.

The games at Sinquefield were rather late at night, continuing until 05:00 in the morning. Did you manage to follow all?

Schedules were a bit prohibitive, but fortunately due to the great passion that unites us, no one commented on the sleepy and tired faces around Piumini Danesi. Everyone was happy and great debates about Caruana, Italian chess, and chess in general sparked in lunch breaks. Probably you know how an Italian fan debates football. Well, this time with equal passion we were debating daily another sport and it was chess.

Now Caruana continues playing, starting Saturday he is participating the the Champions League – the European Club Cup in Bilbao together with Nakamura and Maxime-Vachier Lagrave and other top players. Do you expect Caruna to continue accumulating points?

In Italy there is a proverb: “The appetite comes with eating”, by pure superstition I can only tell you that the enthusiasm and support for Fabiano may only increase.

The difference between Caruana and the World Champion Carlsen has melted and now they are close in the standings. Could you predict a World Championship match between the two in the next years?

With crossed fingers we are sure that this match will happen – however whatever the result will be it will give us something great to write about in history books of chess.