“There are no draw rules, but for our spectators and sponsors sake, we hope you will all play fighting games,” Rich said.

And fighting games there were. Round one saw three decisive results, and two wild and crazy draws. And, like the recently finished Tal Memorial, black already has a plus score. 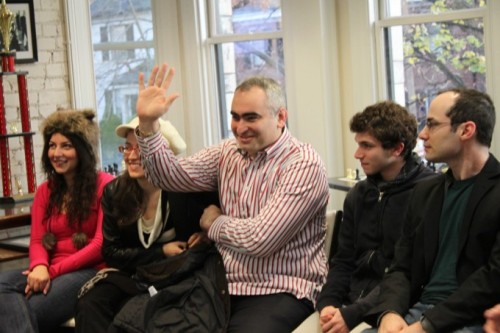 The game between GM Georgi Kacheishvili and IM Irina Krush was the first to finish. No, this was not a boring draw between coach and pupil, as Kacheishvili seemed to gain the upper hand early, but Krush sacrificed material for counter play, eventually giving perpetual check down a rook!

The other games all went over four hours and past move 40. GM Mesgen Amanov seemed poised to win for a long time, but just as the time control was within sight, he blundered with Ne4. This allowed 14-year-old IM Darwin Yang to escape with his final move e6(!), which opened up black’s king and secured a perpetual. 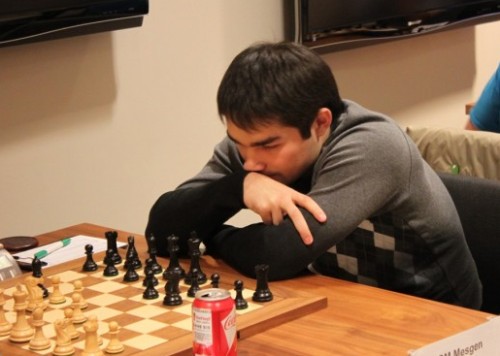 Although two draws started the tourney with three games left, that was all the draws for the round as IM Marc Arnold won with black against IM Angelo Young. Arnold said he misplayed the opening, and Young had good attacking chances, but he went too far, and when the dust settled, Arnold was an exchange and a pawn ahead with a safe king, and the win was only a matter of good technique.

WGM Tatev Abrahamyan had black in her favorite French against IM Greg Shahade. Shahade has made a comeback of late and is really trying to improve his game. White seemed to have the better of it for much of the way, and in time trouble, Abrahamyan’s troubles escalated. She was unable to hold the material balance once time control was made. Shahade easily converted his two-pawn advantage in the endgame. 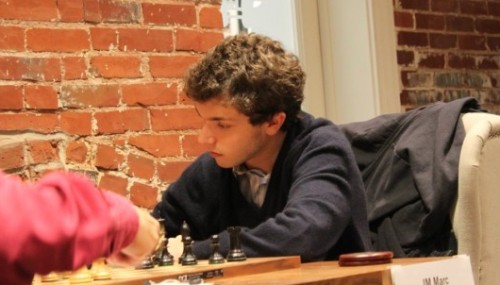 The last game to finish was a sharp Sicilian between IM Danny Rensch and GM Andre Diamant. Both players had just finished playing in the Thanksgiving Open here in Saint Louis, but they were still eager to fight. Rensch is especially dangerous with white, but an ill-timed exchange sacrifice left him looking for compensation the rest of the game. Eventually, Diamant was able to sacrifice his extra exchange for a myriad of pawns, and once one of the little guys got to a2 (threatening a1=Q mate!), Rensch had to throw in the towel.

The tournament has been designed to give American players GM norms, and the score necessary this event is 6.5 out of 9. Abrahamyan can also secure an IM norm with a score of 4.5 out of 9. Thus far IM Arnold and Shahade are off to a good start and hope to continue their good form in the days to come.

The remaining eight rounds will be played two games per day at 11 a.m. and 5 p.m. Central time. Live games, standings and pairings can be found at www.saintlouischessclub.org. 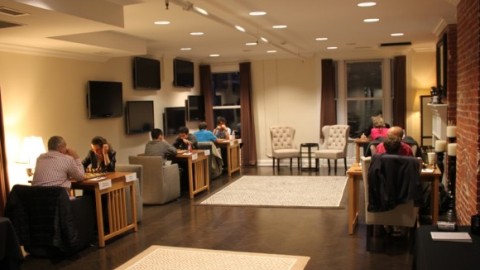